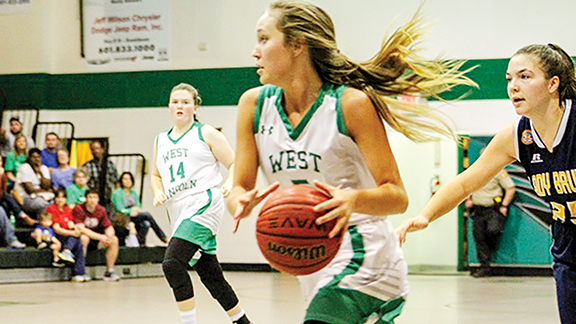 Photo by Emily Phillips/West Lincoln junior Skylar Hall pushes the ball down-court against Madison St. Joe Monday night in their 63-30 win in the first round of the 2A girls’ basketball playoffs. The Lady Bears will host the second round against either Collins or Enterprise (Clark County) Friday night.

West Lincoln’s Lady Bears dominated St. Joseph 63–30 Monday night to advance to the second round of the 2A girls’ basketball playoffs.

West Lincoln took an early lead over St. Joseph 14–6 in the first quarter. The girls in white added 21 points to their score in the second, limiting St. Joseph to only two points and heading into halftime with a 35-8 lead. The Lady Bears further increased their lead in the third quarter, pushing it out to 49–22, and clutched the win over the Lady Bruins.

“Fundamentals, layups, and free throws are what win ball games,” said West Lincoln coach Brooks Smith. “Going forward, we have to clean things up and improve our game play.”

The Lady Bears came out strong but slow in the first quarter, putting on an astounding performance in straight fundamentals. Rotation around the key allowed them to perform at a high level and keep control of the clock, but their shots from the outside would not roll over in the same capacity.

West Lincoln only scored one point in the first three minutes of the game, which put a damper on their momentum. At the 3:30 minute mark, the atmosphere in the gym picked up and sparked a fire inside the home team. The Lady Bears began attacking the inside game and going hard to the basket.  After the inside game picked up, second chance baskets and stellar passes led to a game controlled by West Lincoln.

Dickerson, junior Elizabeth Stogner, and junior Mattie Floyd had eight, three, and one rebound, respectively. Gerald and Dickerson both had three steals, and Sturkey had one steal.

The Lady Bears were sent to the line for a chance at 17 extra points, adding 11 of those to their final score.

West Lincoln’s Lady Bears advance to the second round of playoffs and will play Friday at 7 p.m. in Jack Case Gymnasium. They will take on the winner of Tuesday night’s matchup between Collins and Enterprise (Clark County).

The Daily Leader sought to interview the top-performing Lady Bears, but coach Brooks Smith has prohibited his team from speaking to the press.

Seven runs in the first inning helped give the Copiah-Lincoln Community College Wolves a 9-4 win over No. 11 Panola... read more