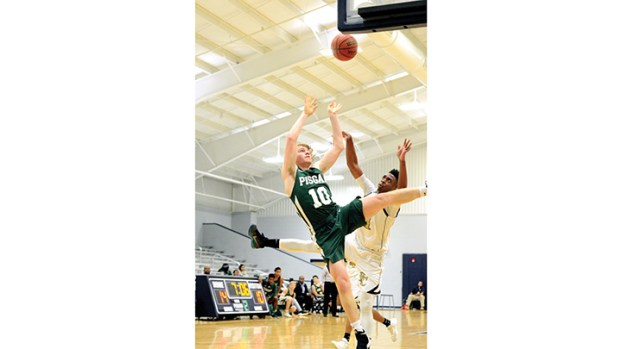 Photo by Adam Northam/Pisgah junior Jeffrey Cole (left) gets crossed up after contact with Bogue Chitto sophomore Zach Upkins in Tuesday night’s 2A playoff game at Bogue Chitto. The visiting Dragons won 49-46, knocking the Bobcats out of the postseason in the first round.

The Bogue Chitto Bobcats are done for the season after losing to Pisgah 49-46 in the final minute of Tuesday night’s first-round playoff game.

There was no moment of finality, no clear advantage of size or strength — in an evenly matched contest, the game was decided with 50 seconds to go, with the visiting Dragons getting the roll on one more possession than the Bobcats. Bogue Chitto’s last-chance shot bounced out, and Pisgah controlled the game’s final 17 seconds until the buzzer.

“They had the mental edge on us, and 90 percent of the game is mental,” said Bobcats junior Damarcus Godbolt. “I think we kind of misjudged them. They moved the ball really crisply and got off a bunch of shots.”

The Bobcats and Dragons seemed to match each other move-for-move throughout the game. After Bogue Chitto claimed an even first quarter 12-10, Pisgah flew off on a 14-2 run that lasted more than four minutes. The Bobcats finally shut it down with 2:51 remaining before halftime and went for their own flight, closing out the half on an 8-0 run to trail just 25-24 at halftime.

Neither team was able to escape in the second half. The third quarter ended in a 10-10 tie, with Pisgah holding the same one-point lead, 35-34, at the start of the final period. The teams continued trading the lead until halfway through. In such a close game, three-pointers are critical, and Pisgah sophomore Ladarius Fulgham sailed one in at the four-minute mark to put his team up by two points.

The Bobcats would tie the game with 50 seconds remaining, but never lead again.

That’s when Bogue Chitto junior Brandon Lewis dashed in for a layup to flatten the score at 44, but Pisgah junior Cooper Patterson took the next possession for a bucket and a foul, converting the and-one to give the visitors a 47-44 lead. Bobcats sophomore Zach Upkins hit two free throws and Dragons sophomore Kayon Fulgham hit one to make the score 48-46 with 19 seconds remaining.

With the clock dying fast, Bogue Chitto drove down on its last-chance possession for a game-tying shot that bounced out. Pisgah took it the other way, hit one more free throw and controlled the final seconds to deny the Bobcats another opportunity.

Defeat kept the Bobcats in the locker room a long time, and a few pairs of hurt eyes watched the wood as the players exited the gym. Understandably, Godbolt was the only player who volunteered to speak, and already his message concerned next season, when Bogue Chitto will put eight seniors on the court.

“Everybody in the locker room will be back. We’ll be the vets next season. We’ll have to do what we’re expected to do,” he said. “Most of us play football, so we’re going to get ourselves faster, stronger.”

Coach Mark Pitts gave his team a simple message postgame — there are 50 teams in 2A boys’ basketball, and 49 are going to lose. He was unsure of why his team, with an advantage down low and years of chemistry, was unable to deal with Pisgah — maybe the jitters, he said.

Godbolt talked of expectations, and Pitts did, too.

“We have to continue to build on this season with the drive and focus needed to play the game of basketball,” he said. “Next year, these guys will be seniors. They haven’t had any seniors, no senior leadership when they were coming up, and I hope they will provide that to the younger guys. It’s almost biblical with these guys. The Bible says if you train up a child in the way he should go, when he gets older he won’t depart from it.”

Lawrence County’s Lady Cougars breezed through the first round of the 4A playoffs, beating South Pike 56-34 to advance to... read more