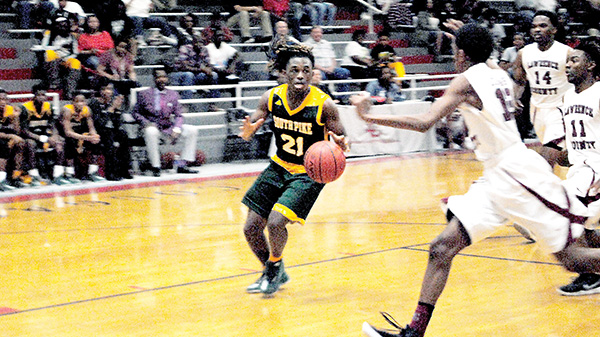 Photo by Dave Linton/South Pike’s De’Vonta Harrell (21) works his way toward the basket as a trio of Cougars moves in to contain him during Tuesday night’s game.

Lawrence County was eliminated from the 4A playoffs after losing at home to South Pike Tuesday, 65-61.

Suiting up for the final time, the Cougars gave it all they had and left it all on the court. In a game that could’ve gone either way, Lawrence County had to play from behind for the duration. Turning up their offense, the Cougars used a fourth-quarter rally to almost steal the win, but South Pike was able to make a few extra plays with time expiring to pick up the win.

“I thought the guys gave a good effort towards the end,” Lawrence County coach Pat Bridges said. “I take my hat off to South Pike. I think they wanted it a little bit more than we did. I wish them luck in the future.”

The game started off with lead changes and ties. Each team was able to create turnovers, but the Eagles got the best of the exchanges. South Pike led 14-9 heading into the second period.

Lawrence County fought hard to knock down the Eagles’ lead in the second. Causing South Pike to get into foul trouble late in the half, the Cougars managed to close up the score and trailed 28-26 at halftime.

Coming out of halftime, South Pike started draining threes to try to pull away from Lawrence County. Despite turnovers, the Cougars were able to keep close to the Eagles. South Pike led 47-39 as the third quarter ended.

Playing from behind, Lawrence County started to mount a comeback. Halfway through the final frame, the Cougars had cut the lead down to just three points, 54-51.

With three minutes left and the crowd going wild, the Cougars came even closer to South Pike, 57-56. Both teams shot from the free throw lines, which resulted in ties and lead changes.

The Cougars kept the game close with time running out, looking to complete the comeback. South Pike was able to create a few extra plays, in the end, to knock Lawrence County out of the playoffs with a 65-61 victory.

Lawrence County finishes the season with a 10-0 record in Region 7-4A and a 20-11 overall record.

South Pike will take on Pass Christian on Saturday, in round two of the 4A playoffs.

West Lincoln’s Lady Bears dominated St. Joseph 63–30 Monday night to advance to the second round of the 2A girls’... read more