‘There was a special celebration in heaven’ — Local ministers remember Rev. Billy Graham

The value of a man’s life is best assessed by the legacy he leaves behind, and — with the Wednesday passing of Billy Graham — area preachers have paused to reflect on the lasting influence of “America’s Pastor.”

Graham was a well-regarded orator and counselor. He served as spiritual advisor to 12 American presidents and, at the request of Queen Elizabeth II, gave a sermon at Her Majesty’s private chapel at Windsor Castle.

He was also a champion of the civil rights movement, refusing to preach to segregated congregations, and it is estimated that his global crusades reached roughly 200 million people.

But, despite his manifold successes, Graham was a simple man with a simple message: accept Jesus Christ into your heart and be saved.

Mike Britt, the worship leader at Clear Branch Baptist Church, attended one of Graham’s Crusades in the 1970s, and the experience made a powerful impression on his spiritual perspective.

“It was just really overwhelming. We were at a football stadium, outside, but, man, there were no distractions. You just felt the presence of the Holy Spirit,” he said.

Britt guessed that 46,000 people were in attendance at the Mississippi Memorial Stadium, and he recalled the incredible energy pouring out from the packed arena.

“There were hundreds that went down that night and accepted the Lord from that salvation message. I just remember being caught up in the excitement of being able to be there,” he said.

Graham led by example, and he taught Britt the importance of being an active representation of God’s unbending love. Now that the famous evangelist is gone, he said it is now more important than ever before that Christians make an effort to spread the Gospel.

“I believe we’re going to have to step up to the plate and be strong. We have to keep on keeping, sharing the Word to the lost in our communities,” he said.

Steve Jackson — head of the Lincoln County Baptist Association — twice had the privilege of hearing Graham preach. He, like Britt, feels a deep sense of personal loss at the evangelist’s death.

“You knew exactly where he stood on sin and specific sins, and he did it without browbeating people,” he said.

He first heard Graham preach in 1975, during a Jackson crusade. Then, while attending the Billy Graham School of Evangelism in 1978 in Memphis, he met him face to face.

“I know that there was a special celebration in heaven today. Billy Graham knew exactly who he was and whose he was,” he said.

Jackson has been a pastor for 41 years, and he said Graham has been his greatest ministerial influence. The most important lesson he learned from the great crusader is to keep the message of salvation as simple as possible.

“Dr. Graham showed that you can have a detailed and effective organization and that organization can be run with integrity. He never sought the spotlight or elevated himself. He often called himself a fellow sinner, saved by grace,” he said. 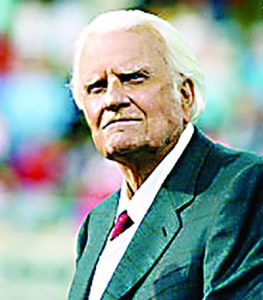 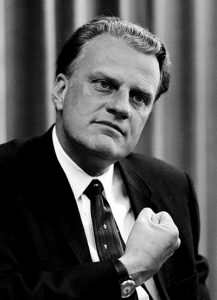