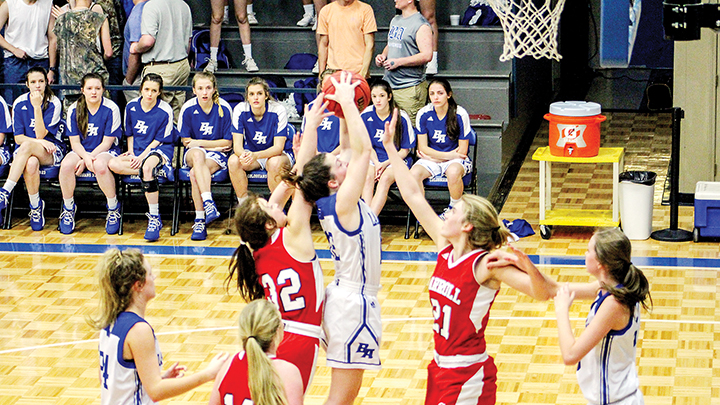 Photo by Emily Phillips/Lady Cougars senior Kailyn Jordan snatches a rebound away from Carroll Academy Wednesday in her team’s 47-39 win. The BA girls advanced to the second round of the state tournament and will face Lamar Christian this afternoon.

Brookhaven Academy’s Lady Cougars squeezed past Carroll Academy 47-39 Wednesday to move to the semifinals of the MAIS Class AA Tournament.

The Brookhaven girls took a low-scoring lead against Carroll Academy 15-8 in the first quarter, but allowed Carroll Academy to catch up in the second, heading into halftime tied at 19. The girls in white added 11 points to their score in the third quarter, while only allowing Carroll Academy three points. The Lady Cougars allowed a few more baskets late, but ultimately kept control over the Lady Rebels for the victory.

“I asked for senior leadership tonight, and that’s what I got because I told them this is a put-out game,” said coach Jason Case. “We’ve been working to this point all year long, and they showed tremendous leadership and hard work. I’m very proud of them.”

Going into tonight’s game, the added pressure of a one-and-done situation weighed heavily on the varsity girls, as the early game play for the Lady Cougars leaned more toward sluggish and frazzled. The dominating outside game and impressive jump shots Brookhaven’s fans were accustomed to seeing were very slim.

What they lacked in offense, they made up for in a major and crucial way on the defensive side of the ball. Both teams went into the locker room tied at 19. The slow first half, and any words of wisdom from Case, seemed to jolt the Lady Cougars back into the mindset they needed in order to win. Their improved outside game, combined with their strict fundamentals, led the girls to a hard-fought victory.

“There was a lot more pressure on me in this tournament,” said BA senior Cameron Watson. “As a senior, my season could end with a loss here.”

Case led the Lady Cougars in defensive play with six rebounds and two steals. Martin, Warren, Smith and Crosby had five, three, two, and one rebound, respectively. Jordan and Watson both had four rebounds. Cameron Watson also had two steals, while Martin had one steal.

The Lady Cougars were sent to the line for a chance at 15 extra points, sinking 10 of those shots for 67 percent.

Caroline Mumme and Sandy Rhea Tackett both had 13 points to lead Carroll Academy.

The Lady Cougars will play Lamar Christian in the semifinals of the MAIS Class AA Tournament in Brookhaven today at 2:15 p.m.