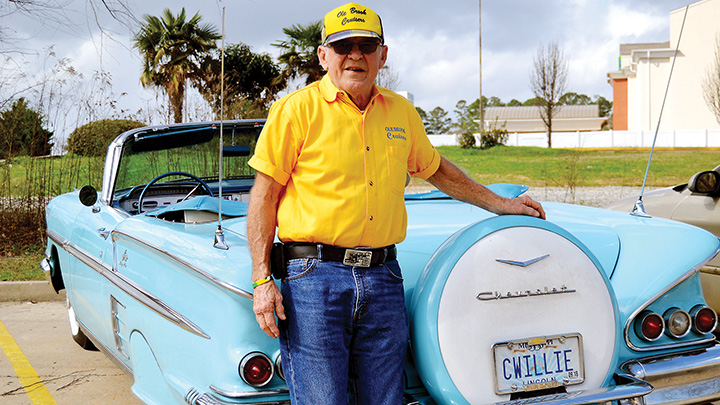 Photo by Donna Campbell/Tommy Smith, with the Ole Brook Cruisers, shows off his 1958 Chevy Impala convertible Thursday. Smith helps organize the Goin’ to Town car show, which will be held March 4 in downtown Brookhaven. Entry is $10 before Wednesday and forms are available at the Brookhaven-Lincoln County Chamber of Commerce. Entry on the day of the show is $15.

Classic cars lined the streets of downtown Brookhaven for last year’s Goin’ to Town event, which gave visitors at least 200 reasons to attend.

T-Tommy Smith, one of the show’s organizers, said he’d like to see even more vehicles entered in this year’s show, set for March 3.

His buddy, Tommy Smith, has two cars of his own — a 1958 Chevy Impala convertible and a shiny red 1940 Ford sedan. However, he won’t be entering them since he’s a member of the Ole Brook Cruisers and is helping with the show.

He loves to see the other entries, though.

“We’ve got friends from all over the nation,” he said. “It’s a camaraderie of car people that we just love to be around. It’s a lot of fun to look at the cars.”

Dash plaques are available for the first 150 entrants.

Entry forms are available at the Brookhaven-Lincoln County Chamber of Commerce, who puts on the show with the help of Fielder’s Pro Shop and the Ole Brook Cruisers.

“We’ve been doing this since 1994,” T-Tommy Smith said. “It gets bigger every year. It’s been bigger that last two years than it’s ever been.”

The Brookhaven Fire Department will be demonstrating their extrication skills again this year. They gave a Jaws of Life demonstration at last year’s event that was very popular, Smith said.

“Smith Bros. Collision has kindly donated a car we can take apart,” he said.

New Sight Baptist Church will operate the concession stand again as a fundraiser for their church.

“We pick on them all day about having the Road Kill Cafe,” he said.

The event is free for the public.

“The owners of the cars are right there, so they can talk to them about how they got them and how they were built. There’s all kinds of stories to be told about their car,” he said. “For the car people, it’s the first show of the year in this part of the area. People have cabin fever and they’re ready to get out.”

A meet-and-greet supper will be held March 2 at the Hampton Inn.