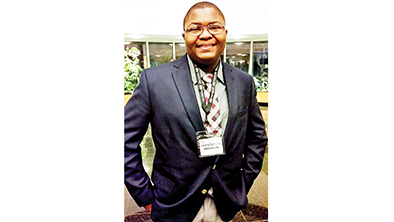 Christopher Robinson is shining up his cowbell.

He is one of 10 students chosen from 975 applicants for a Mississippi State University Presidential Scholarship.

The scholarship is valued at approximately $75,000, which covers tuition and room and board for four years of undergraduate study as well as $6,000 for study abroad programs and $4,000 for undergraduate research.

The Presidential Scholarship is one of the university’s most prestigious freshman awards. Each scholarship is awarded to 10-12 of the most outstanding entering freshman on a competitive basis.

Only 50 students were chosen for the interview.

Robinson, the son of Robert and Brenda Robinson of Brookhaven, practiced by conducting a mock interview with his parents.

He memorized all the reasons he wanted to go to State so he’d be ready if the panel of judges asked.

His biggest plus, besides his grades, was his attitude. He decided he’d tackle the interview the way he tackles life — just be himself.

“That works out the best,” he said.

His mother said she and Robinson’s father are thrilled that their only child will be attending his college of choice without the burden of working his way through school. The scholarship will allow him to focus on his studies.

“With school paid for, it’s amazing,” she said. “It’s such a blessing.”

Robinson scored a 34 on his ACT and holds a 4.0 GPA at Ole Brook where his class load has included AP English Composition I and II, AP chemistry, AP biology, AP physics, AP calculus, and AP microeconomics.

His took his first ACT in the seventh grade and scored a 17. On his fifth try he decided his 31 was good enough.

His parents talked him into trying for the 34 so he’d at least qualify for housing somewhere.

“That three points worked out real good,” she said.

His mother said Robinson is wise beyond his 17 years.

“He’ll say, ‘If you pay attention and get it in class, you don’t have to study,’” she said.

Another gem of his: “Nothing is hard — you just don’t know how to do it.”

Brenda Robinson said everyone in the family is excited for this new adventure.

“We’re excited to see what he’s going to accomplish,” she said.

Robinson is interested in cardiology but also medical research.

“I like the doctor idea because of helping people, but with research, if you make one breakthrough you help millions of people,” he said.

A computer glitch is to blame for Brookhaven’s quiet tornado sirens. But that’s fixed now and the loud blasts heard... read more