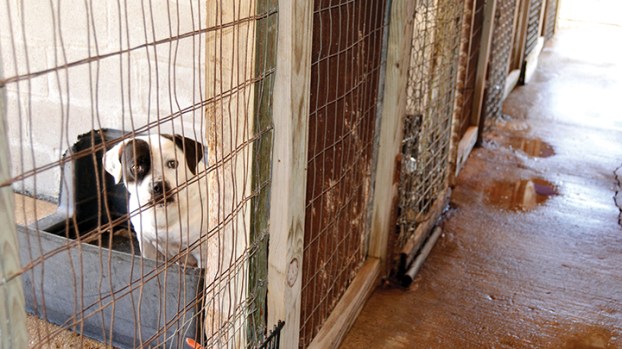 Daily Leader file photo/A dog waits to be adopted or claimed at the Brookhaven Animal Shelter in 2017. The city has $100,000 earmarked in the budget to build a new shelter, but has not determined a location for it.

Brookhaven animal shelter yet to find a home — City has $100K earmarked for project, but needs a suitable location to build

It’s been nearly a year since the city’s engineer presented Brookhaven aldermen with the floor plans for a replacement animal shelter, and while the money to build it is in the bank, the final location is still up in the air.

“But we’re waiting on results of the soil percolation test done by the (state) health department to determine if a septic tank will be allowed,” he said in an email to The Daily Leader. “After that comes back, the board has a final review. We’ll advertise for bids.”

Based on the preliminary plan McKenzie presented March 21, the shelter would cost about $150,000 including site preparation and construction, he said. He said the final budget would depend on where the city builds it.

At that time, the board anticipated some changeover with the municipal election in June 2017. At least four aldermen did not seek re-election.

Ward 1 Alderman Dorsey Cameron, who returned to the board in 2017 after a four-year hiatus, said the issue hasn’t come back up with the new board in place.

“That’s something we really haven’t discussed. It’s something we are going to have to do,” he said. “We have the money to do it. It will probably be something that will come up at the next board meeting.”

That will be March 6.

Mayor Joe Cox said last year that $100,000 out of the city’s general fund has been earmarked to build the shelter.

The previous board budgeted the money for it, but no location has been decided, Cameron said.

“We don’t want to lose this money by sitting on it,” he said. “We should build one and one that is suitable.”

The current shelter sits at the end of a dirt road that winds past piles of debris at the city dump. Two rows of dog runs, about 18 total, are covered with a sheet-metal roof.

Cox said last year that one location considered is beside the transfer station at the landfill. It would back up to a wooded area which would give it shade. Fans would be installed to keep the 12 runs cool in the summer, though the office area would be air conditioned. The entire building would be heated, he said.

Cox said the shelter will not be rebuilt in the current location.

The Brookhaven-Lincoln County Chamber of Commerce and the MSA Foundation have joined forces to collect money and supplies for the... read more