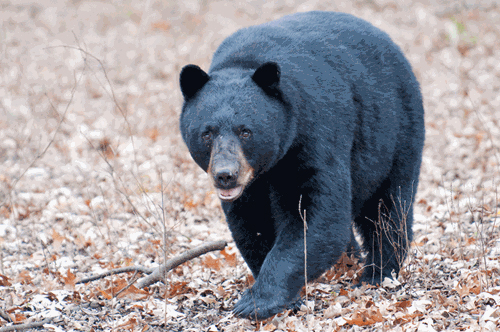 Photo by Mississippi Department of Wildlife, Fisheries and Parks/A black bear is suspected of biting and scratching a woman's car in Sontag Friday.

They’re not known for an appetite for automobiles.

That’s why the Lawrence County sheriff and a bear biologist with the Mississippi Department of Wildlife, Fisheries and Parks are scratching their heads after a homeowner in Sontag said one attacked her car.

The unidentified woman initially filed a vandalism report after waking Friday to find deep gashes and gnaw marks on her two-year-old car.

“It scarred the car up pretty good,” Sheriff Lessie Butler said. “She had bite marks on the fender. That’s what it looks like to me, around the tire part. It kind of looks like it was trying to bite on the fender side. It looks like teeth marks.”

When his deputy arrived at the house on Sontag-Nola Road, he discovered a bear track.

Butler hasn’t investigated a bear attack in Lawrence County before. He thinks the creature might have been confused.

“Maybe with the reflection on the car, he thought it was another bear,” he said.

However, that’s not likely, said MDWFP biologist Jamie Holt. But, then again, Holt doesn’t have any other suggestions either.

“What baffles me is there was a garbage can beside the car. The garbage was completely untouched,” he said.

The homeowner had also tossed some apples into the back yard and those hadn’t been eaten.

Holt said the woman was meticulous about her car and didn’t eat in it and didn’t have an air freshener in it that might attract a bear with its scent.

The track was found in the carport where the vehicle was parked. It’s an imprint from a bear’s hind foot and shows the sole and all five toes. It’s about the size of a deputy’s cap, Holt said.

The print looks like it could be from an adult bear, over 18 months old and probably a male, since it’s roaming. Females tend to stick close to home, he said.

The homeowner told authorities that neighborhood cats sometimes seek shelter in her carport, but black bears aren’t predators so it’s unlikely he was trying to catch one.

“I can’t understand why a bear would be after a cat,” Holt said.

So far, no one in the Lawrence County area has reported a bear sighting. If someone does, they’re asked to visit www.mdwfp.com and complete a form on the Black Bear Program page that can be emailed to the biologist.

Holt warned of getting too close to the bear.

“You should not approach it and try to pet it,” he said. “Black bears are not generally aggressive but they are a big, powerful animal and should be respected as such,” he said.

Likewise, they shouldn’t be harmed. Bears are a protected species in the state.

To report a bear sighting, visit the MDWFP website or call 601-432-2199 during business hours. After hours call 1-800-Be-Smart. If it’s an emergency, a law enforcement officer will be dispatched immediately.