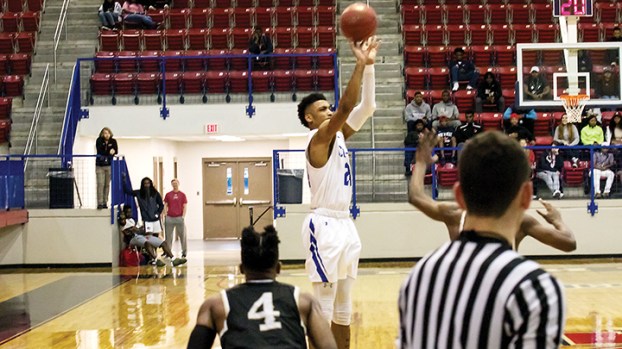 Photo by Natalie Davis/Youry White, a sophomore from Baton Rouge, Louisiana, spots up for a three-pointer. White led the Wolves with 17 points.

The Wolves prevented the Tigers from scoring from the floor in the final 6:10 of the contest and cut a 12-point deficit to just two in the final minutes, but the late push fell just short.

Co-Lin could not hit the three-ball early in the contest, as Northeast leapt out to a 10-0 lead with 17 minutes remaining in the opening half. The Wolves found some rhythm midway through the half and cut the Tigers’ lead to five, 17-12, with 10:08 on the clock.

Northeast responded with an 11-3 run and once again pulled away to a double-digit lead, 29-15. Anthony Jones kept the Wolves in the game after going two-for-two from the free throw line, and rattling home back-to-back layups. The Wolves began getting stops on the defensive end of the floor and slowly chipped the Tigers’ lead down to five, 34-29, but Northeast went on a brief 4-0 run to close out the half and took a 39-30 lead into the locker room.

The Tigers came out on a 13-2 run and stretched the lead to 18, 52-34. Back-to-back three-pointers from Youry White sparked the Wolves offense with 16:29 remaining, but the Tigers thwarted all Co-Lin efforts until the final six minutes of play.

Northeast’s final basket came with 6:10 remaining when JaQuante Bell made a layup. The Wolves began playing lock-down defense in the final minutes and put a full court press on the Tigers. The pressure gave the Wolves more opportunities on the offensive end of the court and Co-Lin cut the tigers lead to five, 73-68 with two layups and a free throw from Tray Lawson.

A free throw from Jones and a shifty drive to the basket from Jonathan Floyd cut the Tigers’ lead to just two, 73-71, with 1:14 remaining. Unfortunately, the Tigers hit six big free throws in the final 30 seconds of play to hold the Wolves at bay and advance to the second round with a 79-73 victory.

White led the Wolves in the scoring column with 17 points after going 7-for-11 from the field. Jones poured in 14 for the Wolves and Floyd and Lawson both added 13. Lawson also led Co-Lin with eight rebounds, while White hauled in six. Jones, Floyd and Miles Daniels had five rebounds each. Darrian Wilson, Damarius Brooks and Lawson posted three assists each.

Bryce Smith and Conner McKay led Northeast with 13 points each, while Antares Gwyn added 12. Gwyn, Felix Hayes and Bell all brought down eight rebounds for the Tigers.

The Wolves will be back in action next week in the NJCAA Region XXIII Tournament on the Campus of Mississippi College in Clinton.

Wolves 5-0 with win over Millsaps

The Copiah-Lincoln Community College Wolves remain undefeated in the 2018 season after a 10-0 win over Millsaps JV at Smith-Wills... read more