Teacher questions answers on ‘Jeopardy!’ — Brookhaven woman will appear on an episode of the popular TV show June 25 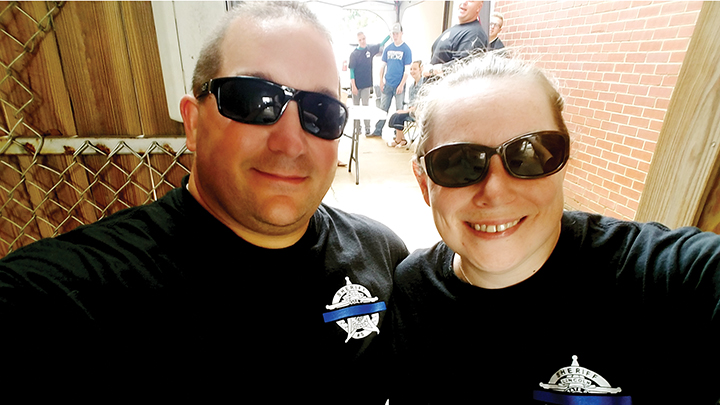 Photo submitted/Kelly Griffin, of Brookhaven, recently filmed an episode of “Jeopardy!” in Los Angeles. Her show will air in June. Pictured are, from left: Lincoln County Sheriff’s deputy Peter Griffin and Kelly Griffin.

This fifth-grade science teacher at Rod Paige Middle School will appear on “Jeopardy!” in June.

Who is Kelly Griffin?

If that’s your answer and it’s Final Jeopardy, you might walk away a winner.

Griffin, 37, tried to get on the show three times before she finally made it into the hot seat in front of host Alex Trebek. She’d grown up watching it with her father and brother. It was a tradition — dinner, news, “Jeopardy!”

Through the years she accumulated an unusually large amount of trivia and fortunately, has the ability to recall it quickly. That’s a skill that serves a “Jeopardy!” contestant well.

Her first shot came when she was just 22 and living in her hometown of Boston. She passed the online test and tried out. She didn’t make the cut, but she made their list.

That meant they’d reach out to her for future auditions.

About three years ago, she tried out in New York. She didn’t make the cut, but again made their list.

Then she and and her husband, a deputy for the Lincoln County Sheriff’s Office, moved to Brookhaven. Peter Griffin also serves in the National Guard unit based in Monticello that will soon be deploying to Kuwait.

He kept urging her to try out again. They tape the show to watch at home when they’re together and she’s better at it than he is for most of the questions. She’s good at history and geography, but he tops her on the medical questions — even though she’s a science teacher — and sports.

“We’ll watch like five episodes in a row. We’ll binge watch it,” she said.

She took his advice and tried out again.

She aced an online test of about 50 questions and was invited to Houston, Texas, to audition Dec. 1. By then she was about two months pregnant and feeling the effects of morning sickness. That took her mind off her nerves so she was much more laid back and relaxed.

“I was like, this is the third time I’ve done it. I’m going to just have fun with it,” she said.

She met Trebek during that visit since he was there visiting a new affiliate that would be carrying the popular game show.

She got the call in February inviting her to Culver City in Los Angeles County to film an episode.

Being on the show was a bit different than shouting answers — or rather questions — at her TV screen. She had to master the buzzer to get through six categories and three rounds. That’s sometimes harder than getting the answers correct because if you can’t buzz in, Trebek doesn’t call on you. Griffin said the secret is in the timing. As Trebek reads each clue, the contestants ponder the correct response to give. As he utters the final syllable, it’s time to buzz in. If they hit their button too soon, they’re penalized with a delay. If they hit the sweet spot though, and give the correct question for the clue, then they’re in the money.

“I had lots of practice with the buzzer, but it’s hard,” she said.

She listened for Trebek to finish the question and watched for the lights at her podium to signal its time to start pressing.

“If you ring in too early, the buzzer locks you out for about a quarter of a second,” she said.

After Griffin filmed her episode, she and her husband were able to explore Los Angeles while on the West Coast, taking in the sights and eating barbecue in Koreatown. They wanted to try that since Peter Griffin had been stationed in Korea years ago.

By the time the episode airs, she’ll be out of school and raising their first child. Maggie Griffin is due April 12 while her daddy will be in Fort Bliss in Texas for training before heading to Kuwait. Griffin can’t tell the outcome of the episode, but knew what she’d do with the money if she won — it was new clothes and a college fund for Maggie.

Griffin encourages others to try out for the show. The next online tests will be given March at 7 p.m., March 7 at 8 p.m. and March 8 at 9 p.m. A teen test will be given online March 15 at 5 p.m. To register for the online test, visit jeopardy.com/be-a-contestant.

Superintendent Carlock pays tribute to Brookhaven Board of Directors