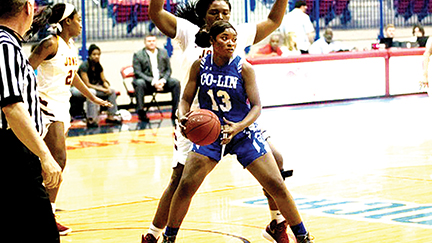 The Lady Wolves of Copiah-Lincoln Community College could not find their offensive rhythm Thursday, as the No. 5 JCJC Lady Bobcats defeated Co-Lin 78-53 to claim their second straight MACJC State Championship.

The Lady Wolves are back in action next week for the NJCAA Region XXIII Tournament in Clinton on the campus of Mississippi College. Co-Lin is slated to take on the Hinds Lady Bulldogs at 5:30 on Wednesday, March 7 at 5:30 p.m. Fans can watch the game live at colinathletics.com or listen live at WMJU 104.3 FM out of Brookhaven.

Jones grew their lead over the second quarter as Alexis Tolefree capitalized on trips to the free throw line. The Lady Bobcats took a 22-point, 41-19, lead into intermission.

In the third, the Lady Wolves had a bright spot as Co-Lin went on a brief 6-0 run led by Kyeonia Harris. Harris, hit a three, and drove to the paint on the next possession for a layup. Going into the fourth, Co-Lin trailed 58-32.

The Lady Wolves outscored the Lady Bobcats in the fourth, 21-20, as Co-Lin began making baskets. T’Kyra Hicks led Co-Lin in the final quarter with 11 points. The late push cut JCJC’s lead down to 20, 65-45, with 5:56, but the Lady Bobcats continue score on the offensive end and prevented Co-Lin from going on runs.

Hicks led the Lady Wolves with 18 points after going 8-for-8 from the free throw line. Harris was the Lady Wolves only other double-digit scorer with 10. Alexus Holt led Co-Lin on the glass with eight rebounds and with five assists. Destiny Hemphill and Harris both posted three steals.

Co-Lin falls to No. 5 JCJC in MACJC State Championship

The Lady Wolves of Copiah-Lincoln Community College could not find their offensive rhythm Thursday, as the No. 5 JCJC Lady... read more