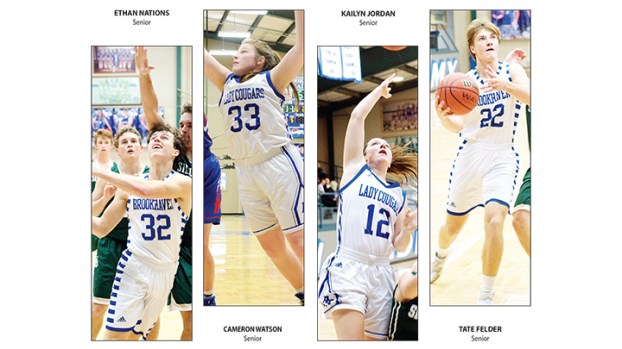 They won them all.

Now, there is just one more game, and this one really is the last one for Brookhaven Academy’s champion senior basketball players. Four of them — Tate Felder and Ethan Nations from the boys’ team, and Kailyn Jordan and Cameron Watson from the girls’ team — will hit the court for the last time Friday in the MAIS All-Star Game.

“It’s my last basketball game. It hasn’t really hit me yet that it’s all over, but it will soon,” Watson said. “Once it does, I’ll be upset for a little while, but you gotta grow up sometime.”

Watson has been to all-star gigs before with the softball team. She said it’s more about the trip than the destination.

“I like the overall experience of being an all-star,” she said. “Even if we don’t win, it’s still fun, and you get to meet a lot of new people and make new friends.”

Friends or no friends, it’s still basketball, and Jordan and Watson will have one more chance to own the floor as highschoolers.

Lady Cougars coach Jason Case said MAIS coaches who made the all-star selections grabbed up Jordan and Watson because of their competitiveness, especially on defense.

Both players averaged around eight points per game in the BA girls’ 31-6 championship season. Watson averaged eight rebounds per game, while Jordan pulled down five boards per contest.

Jordan was assigned to guard the opposing teams’ top players every night, and she averaged three steals per game in the role of chief harasser.

“We’ve always stressed teamwork and doing things unselfishly, putting other teammates first, and those two are good examples of what our team stood for all year,” Case said. “When the ball was thrown up, they both competed. They are winners — they wanted to win basketball games, and I think other coaches saw that in them. We’re going to miss both of them.”

While the Lady Cougars are supplying the all-star team with a pair of tough defenders, the Cougars are sending up shooters. Seniors Tate Felder and Ethan Nations kept the nets warm during their team’s 35-2 championship run, and they’ll look to put more points on the scoreboard against the state’s best Friday.

Felder is a worker. He’s faced injuries every season going back to his freshman year, and has battled through the discomfort each time to contribute to his team.

“The main thing he did was work hard every day, and even hurt he can knock that three down,” said Cougars coach Josh Watts. “He’s a really good shooter. Through all that pain, he persevered and was a productive player.”

Nations is a fighter, too. An undersized player in the post — one of the shorter guys on the squad — he nevertheless got inside where jaws snap shut and put the ball in the basket.

“He was able to score with skill, speed and strength. That pretty much describes him,” Watts said. “He’s a hard-nosed, hard-working kid. There’s never been a night, or a game, I didn’t think he gave me 100 percent.”

Watts said Felder’s and Nations’ appointment to the all-star team is based on effort.

“The thing that set us apart in our district was defense. Both of those guys, even though they were productive and scored a lot of points, played good defense,” he said. “They really made it hard on other teams, and I think that was one thing the coaches noticed when they nominated these guys.”

Lawrence County’s Lady Cougars will play for the ultimate prize after beating McComb 53-38 Monday evening to advance to the... read more