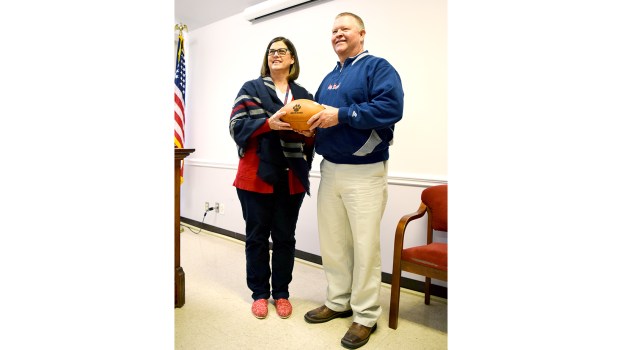 Tucker Peavey, 56, was introduced as the new head of the Ole Brook football program Thursday afternoon, bringing with him a record of championship success and deep Brookhaven ties.

“This is home. No doubt about it,” Peavey said, standing with his wife, Leah Ann Peavey. “This school and this town are in our family, and we’re looking forward to diving back into it.”

Peavey previously coached the Panthers from 2002 to 2010, winning a state title against Clarksdale in 2004 and losing one to West Point in 2010. During that time, he became Ole Brook’s all-time leader in wins at 74-32.

He left Ole Brook for the University of Southern Mississippi in 2011 before settling in as head coach at Southwest Mississippi Community College, where he remained until Thursday.

“I’m looking forward to getting to know the kids. It’s good to watch a kid from junior high to his senior year,” Peavey said. “In junior college, you don’t have that long to develop players, or develop relationships. In one and one-half years, they’re out of there. There’s a different sense of community at that level.”

Peavey said his philosophy for football at Brookhaven is “win now,” and it applies to student-athletes in all aspects, not just Friday nights.

“No matter where you are in life — in school, at home — win now, and you’ll be a winner,” he said. “If we’re in biology at 8 a.m., win now. If we’re in the cafeteria, win there. Winning on Friday nights is huge, but I believe it will take care of itself.”

Peavey said he would continue to run the spread-style offense that has worked well historically for the Panthers, but will make adjustments after becoming familiar with his team.

“In high school, you do what the kids can do best, and it’s up to us as coaches to adapt,” he said.

Peavey’s hiring ends a six-week coaching search that began the day after athletic director Tommy Clopton announced his resignation from the position in January. Clopton said he and the search committee received 45 applications and numerous phone calls before settling on Peavey.

“We listed all the qualities we were looking for in a coach, and several coaches had those qualities, but coach Peavey’s track record of success speaks for itself,” he said. “We are excited about the opportunity for him to lead Panther football again. He will be a tremendous asset to our athletic department.”

“He will help mentor our students and make winners of them, on the field and in the classroom,” he said.

Baseball guys say, “If you can hit, you can play.” Maybe a player can’t pitch, can’t track a ball in... read more