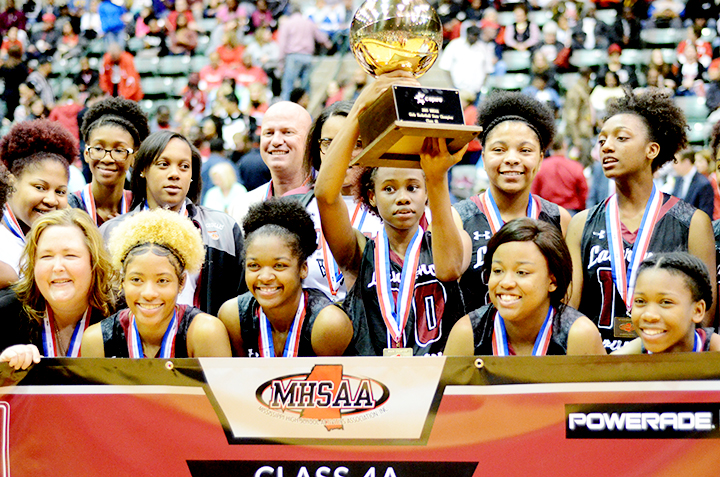 At the end of the second quarter in the girls’ 4A state championship game Thursday, Byhalia’s Lady Indians had run through, over and around the Lady Cougars’ defense, and the game was tied at 23-all at halftime. Byhalia’s quick cutters were getting open, and it wasn’t what the Lawrence County girls were expecting.

“We felt a little overwhelmed,” said Lady Cougars senior Jakya Dampier. “But our coach told us not to be afraid, not to play not to lose, but to play to win.”

In the second half, they played to win. They attacked on defense and held Byhalia to 11 points for the remainder of the game, winning the state title 38-34. It is the school’s first state title in girls’ basketball since consolidation in 1987 — 31 years.

“We made history,” Dampier said. “We overcame our fear to win.”

Fear turned to joy, celebration, tears — the good kind — and the laying of hands on a golden basketball perched atop the state championship trophy, with hundreds of Lawrence County faithful gathered around in the postgame bliss at the Mississippi Coliseum.

“It’s so surreal,” said Lady Cougars senior Bailey Baylis. “When the season started, we had it in our head that we wanted to go to the championship game, not to get put out in the first round. And we did. We got the ring. I’m kind of speechless.”

It was a battle that did not go the Lady Cougars’ way until late.

Byhalia’s first-half offense was slick, and Lady Indians kept slipping into the lane unaccounted for to rain points down on Lawrence County. Byhalia led the high-scoring first quarter 18-16, and both teams played each other to a draw in the second to tie at 23-all at halftime.

Lawrence County’s man-to-man defense pumped the brakes in the third quarter, allowing the Lady Indians only four points. But the Lady Cougars were able to get only seven, and the game was still very much in the air, with Lawrence County leading 30-27 to start the fourth quarter.

It stayed close, but the Lady Cougars found an opening late in the fourth that proved decisive. Lawrence County junior Kyunna Thomas attacked the basket for two points and a 32-30 lead with four minutes remaining, and senior Camryn Davis drove in a couple of possessions later and threw up a nifty underhanded hook to make it 35-30 with 2:09 remaining.

Davis added two free throws with 1:44 remaining to make the score 37-31, and the Lawrence County crowd began to sense victory. Byhalia hit an outstanding three-pointer to quiet the place down with 50 seconds remaining, and suddenly any outcome was possible.

But the moment was too big for the Lady Indians — they missed on their last real chance, and Lawrence County grabbed the defensive board with 43 seconds remaining. They would never let it go. Baylis tacked on one last free throw, and the knife was twisted.

“My family has been telling me, ‘you gotta do it, it’s your senior year,’” said Davis, who afterward was named player of the game. “I did it for my team. It feels great. Our first state title.”

When the game was close, when the Lady Cougars were feeling the pressure, their 23-year veteran coach helped get them back in control. Vicki Rutland said she called a “warrior defense,” a 1-3-1.

“We haven’t run it since before Christmas, so we knew Byhalia wouldn’t have any film on it. I called it for just a few series, just to rattle them,” she said. “Then we switched back to playing man-to-man defense, because man-to-man is what we do.”

Then the Lady Cougars — a 50 percent free throw-shooting team, barely — iced the game from the stripe.

“It’s ironic,” Rutland said. “For Bailey to knock those down, under that kind of pressure, was huge.”

After the game, after the awards presentation and the interviews and the noise, a relieved Rutland seemed to grow younger in the hallways of the Coliseum, changed into her traveling gear, a season’s worth of pressure lifted away. It was her second state title — her first came in 2004 at Northeast Jones — but she did not savor the victory for herself.

“It’s different now. When you’re young you’re trying to build a resume, trying to start a career. It’s not about that anymore. It’s about family,” Rutland said. “I wanted it for these girls. They put in the work, they give up their free time, they sacrifice their bodies. To know this is something they’ll have the rest of their lives, that means everything to me. I have three sons, but these girls are all my daughters.”

Rutland said the state title didn’t just belong to the 2017-18 Lady Cougars. It belongs to all the Lady Cougars who have played and competed since she first arrived at Lawrence County in 2005 to take over a roster with four players.

“This is their championship, too. They started something special,” she said.

“I’m gonna miss my seniors. Next year, I gotta step up and do my thing,” she said. “The players coming off the bench are going to do their jobs, too. I have faith in my team.”