Are guns in schools the RIGHT answer? 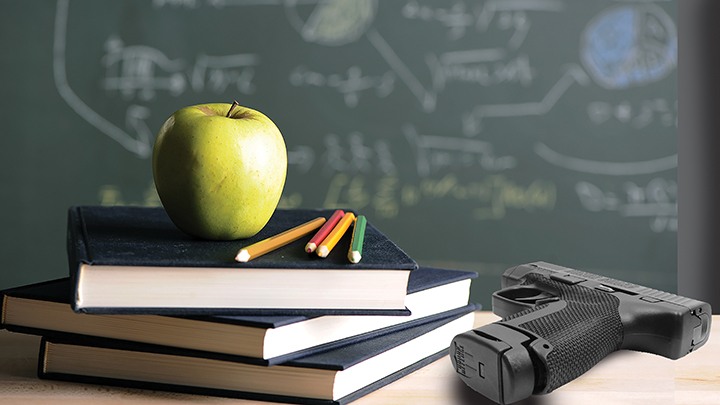 A Brookhaven state representative and proponent of the Second Amendment believes it will take guns in schools to keep guns out of schools.

House Bill 1083 would allow schools to offer firearm training to staff and strengthen campus security. The bill would apply to public and private schools, as well as universities and community and junior colleges.

An amended version of HB 1083 passed the Senate Wednesday. It’s now in the House for further debate. Rep. Becky Currie. R-Brookhaven, supports it because it keeps students from becoming “sitting ducks” in their classrooms, she said.

“I believe that these very sick people who pick a soft target like going into a school, there has to be some sort of deterrent,” she said. “The only way to bring somebody down with a weapon is to have a weapon.”

The effort is an expansion of the Mississippi Community Oriented Policing Services program, which passed in 2013. That program matched local funds to place more trained officers in public schools around the state.

“This bill provides our school leaders with another way to beef up security at their campuses in a responsible manner,” Lt. Gov. Tate Reeves said this week. “Coupled with the MCOPS program we passed several years ago, this is another tool to keep our children safe in the classroom.”

Dustin Bairfield, Lincoln County Circuit clerk and a former law enforcement officer, teaches enhanced carry classes to adults in Lincoln County. Between shots, his students talk. Some of them are in favor of the bill, but just as many are against it.

They’re concerned, as he is, with the safety of it. Those against it say they would rather the state look at alternatives like magnetic door locks in classrooms and law enforcement officers on campus.

“I’m really kind of torn in the middle of which way I feel,” he said.

He thinks with the proper training, armed administrators on campus could work, but the liability is to too great to have teachers carry guns. The people who will be armed need to be carrying at all times for it to be effective, he said. Teachers should be focusing on students and educating them, not on a firearm in a file cabinet.

Bairfield wants to know more about who will be able to carry weapons, who will know who is armed on the campuses and what training those individuals will be put through before he supports the bill.

Sen. Sally Doty, R-Brookhaven, supports the bill with the amendments from the Senate.

“We passed it with a large majority,” she said.

Doty’s youngest of three children is a senior at Brookhaven High School. She said she is in favor of administrators and select staff members carrying weapons at the district’s discretion if they follow the requirements of the bill, such as gun safety, active-shooter training and psychological testing.

“It would provide a different level of security or safety for our school,” she said.

She trusts the school districts to make the decisions about who can be armed.

“School districts should be intentional on who will decide who will have that weapon,” she said. “A school district is going to be very careful and thoughtful about how to structure that program.”

Currie said those who want to make the news with their attacks are choosing locations with very little — if any — armed security.

“You notice they’re not picking a place where there are people who are armed. They’re picking a place where they can take out the most people because nobody is shooting back,” she said. “No one is saying teachers are going to have to be armed. But let’s say you have a couple of coaches who have their concealed permit. What would be wrong with just people knowing that when they come into a school to harm children, they may get shot back at? I think it’s something that we have to take seriously because we can’t have police at every door. It’s just not possible. I want (potential school shooters) to know that if you decide to pick a school in this district, chances are you’re not going to make it out alive.”

Currie said HB 1083 is similar to the “church self-defense bill” that lets pastors and deacons be armed.

“We gave the churches the ability to know where the armed people are and make a plan,” she said. “Nobody is forced into doing it, but you have safety precautions in case something like this happens, so you’re not just sitting targets.”

Rep. Vince Mangold, R-Brookhaven, said the bill may bounce between the House and Senate too many times to make it to the governor’s desk this session. The House didn’t like the Senate changes when it came back so it’s still a work in progress, he said.

Amendments to the bill passed in the Senate would require teachers to take 36 hours of firearms training, pass a psychological screening and an annual shooting test.

Mangold, however, supports the idea of the bill, though he wants to wait to see the final wording before he makes a decision with his vote.

Mangold is in favor of arming retired law enforcement officers and military personnel to patrol campuses.

“We’ve got to figure out something,” he said. “We might could put somebody like that in there. Most all of them are already trained with using weapons and shooting scenarios. I could see something like that working.”