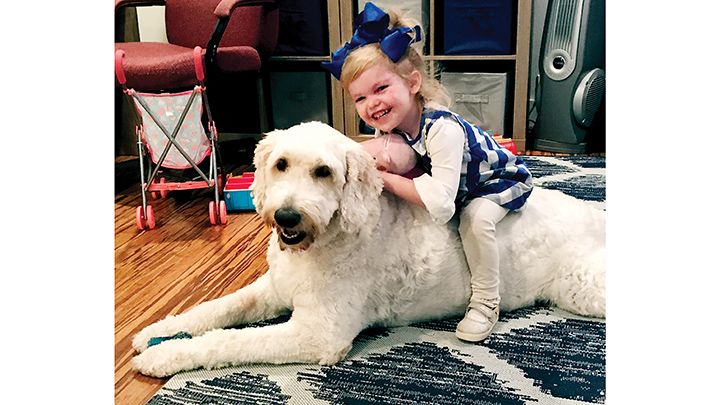 Maley Coleman toddles on skinny legs, leaning on her Sled to keep her steady.

The golden doodle is the almost-4-year-old’s medical alert service dog, and he’s doing his job well.

Maley, who has a birthday in April, was diagnosed with Sturge-Weber Syndrome as an infant. The port-stain birthmark on her face, caused by an overabundance of capillaries near the surface of the skin, alerted doctors to the possibility and tests confirmed it.

Sturge-Weber is a congenital, non-familial disorder caused by a gene mutation. It’s characterized by a facial birthmark and neurological abnormalities.

In Maley’s case, she shows some developmental delays and is prone to seizures, said her mother, Lindy Coleman of Brookhaven.

The Colemans researched the syndrome and learned that service dogs were suggested to help parents stay alert to the seizures.

But they weren’t sure Maley would benefit from having a furry companion. There was also the cost of $14,000, which had to be raised.

“We were worried about the nighttime,” she said, explaining they hoped having a dog trained to sense oncoming seizures would give them the peace of mind to be able to rest.

They also didn’t know if their daughter would outgrow the seizures or if her doctors would find a balance of meds that controlled them.

She might not need a dog, but what if she did?

It takes about 14 months from application to delivery for the dog to be trained, so the Colemans made the call and started fundraising.

They picked Sled up in Ohio two years ago. New owners have the option of changing the service dogs’ names. Coleman chose not to, mostly because Maley’s older brothers thought it was unusual.

“It was funny because my boys didn’t even know what a sled was, being from Mississippi,” she said.

Sled is trained for scent.

“He can smell a chemical change on her body if a seizure is coming or happening,” Coleman said.

He barks to alert the family and goes to get them if necessary. He rarely barks otherwise.

Coleman said Sled has already proved invaluable to caring for Maley. Last summer, the dog stood in front of Coleman and her husband and stared at them. They could see Maley playing close by, so they dismissed it. The next day she had a fever and then she had a seizure.

“He was trying to let us know that something wasn’t right,” she said.

Sled stays by Maley’s side, but sometimes he’s underneath her. His 130 pounds to her 30 means he makes a good pony for a tiny blonde cowgirl.

“He’s extremely protective of her,” Maley’s mom said. “If she’s sick or not feeling well, he knows it and he’s right there with her.”

Sled doesn’t go to school with Maley, since she’s got her teacher to watch her.

“As she gets older, he will probably be with her more, if she doesn’t have me right there with her to give her some independence,” she said.

He’s been to Walmart with them. He sits by the table at restaurants. When he’s out in public he wears his official service dog vest, which signifies he’s working.

“He knows when he has all that on, he’s on his best behavior,” she said. “He knows it’s more serious and more structured.”

Maley’s not aware that the big fluffy dog could one day save her life. She just knows she has a four-legged best buddy.

“I think he’s worth every penny,” Coleman said.

Something he wants me to do — Brookhaven woman…