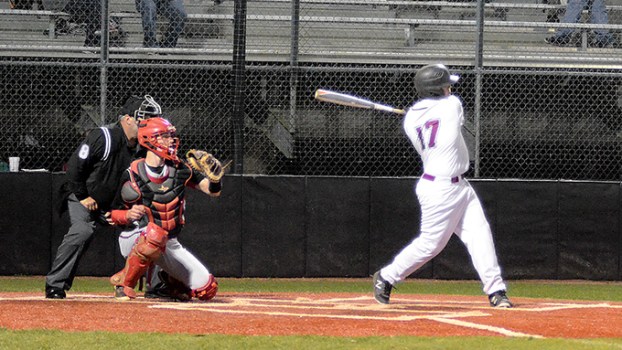 Photo by Dave Linton/Lawrence County’s Tae Cole drives to third on his triple during their victory over Loyd Star Tuesday in the last game of Lawrence County’s spring break tournament. The Hornets had six runs to the Cougars’ nine.

Lawrence County’s half of the third inning was the difference in the game — with the score tied at 4-all, the Cougars forced five runs to hit a nine-run score that would hold out until the end of the game. The Hornets began a rally in the fifth inning, but couldn’t muster enough offense to reach Lawrence County.

“We didn’t do too good,” said Hornets senior Dylan Smith. “They got more hits than we did. We got a little frustrated with each other. We didn’t play very good defense.”

Although the Hornets got two runners on to start the game, Lawrence County’s defense was able to strand them. The Cougars scored the first run of the game off a throw that went over Loyd Star’s second baseman’s head. Lawrence County loaded the bases with two outs.

Lawrence County’s Peyton Little was hit by a pitch, which brought in the team’s second run of the inning. The Cougars scored two more runs off of a pitch that got by the catcher before Loyd Star could get out of the inning.

Loyd Star rallied in the top half of the third to tie up the game. Senior Cade Hodges got things going with a hard-hit double. Case brought in Hodges with an RBI single.

The Hornets loaded the bases with just one out. Logan Smith brought in a run with his infield sacrifice fly RBI. The Hornets scored again off an error by the Cougars. Reese DeHart brought in the final run for Loyd Star on an RBI single.

Tied 4-all, Lawrence County moved ahead as Tae Cole, sitting on third off a triple, came across the plate on a balk call. Roy Martin brought in the second run on an RBI bunt single.

The Cougars loaded the bases, with no outs, and scored another run as Hunter Daley drew a walk. Gage Daley finished the damage on a two-run RBI single.

The Hornets attempted one last rally in their half of the fifth. Smith started the attempt with an RBI single. DeHart scored Loyd Star’s final run of the game off an RBI single before Lawrence County shut down the rally attempt.

“I felt like that first inning had that one big play early that kinda rattled us. We just didn’t play well after that and kinda got frustrated. But that’s part of baseball,” said Loyd Star coach Jared Britt. “You have to clear your head and get ready for the next play. I thought Reese DeHart pitched well for us. We did hit the ball pretty good, we just hit them right at players. Tonight, Lawrence County played better than we did, and they deserve the win.”

Hunter Daley got the start for Lawrence. Nathan Bullock pitched in relief.

Loyd Star will travel to Madison Monday to take on Madison Central.

Lawrence County will be on the road today, as they take on Sumrall.

The game was Loyd Star’s second of the day at the Lawrence County tournament.

The Hornets smoked Mendenhall 13-0 in the preceding game.