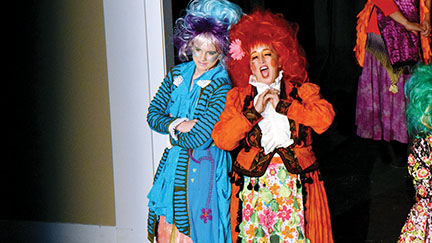 Brookhaven Little Theatre gets $82K from arts commission, plans to expand the Haven

The Haven theater in downtown Brookhaven will expand by a few hundred square feet with the help of a big grant from the Mississippi Arts Commission.

Brookhaven Little Theater will receive a grant from MAC’s expired Building Fund for the Arts in the amount of $82,611, with the money marked for the envelopment and renovation of the old Posey soap building next door on Cherokee Street. BLT President Tommy Sproles said the cash would be spent on the first phases of a project to construct the Marquee Room, which the group hopes to use in numerous ways.

“We want to have something going on in there, perhaps some kind of classes, or a black box theater for our smaller productions, or we can use it for overflow when we have our big shows,” he said.

Sproles said the back portion of the building already contains the Haven’s new women’s restroom, and plans for the remainder of the renovation call for new flooring, new lighting, ceiling repairs, climate controls and another handicap-accessible restroom. The building is currently used for storage and isn’t suitable for much else.

The MAC grant will be paired with a $25,000 donation from the Brookhaven Trust made last February. Previous estimates for BLT’s grand plans for the Marquee Room range from $300,000 to a half-million.

Sproles said additional space is a critical need for the Haven, as BLT popularity has grown quickly over the last decade.

“We’re doing more than I thought we would ever get to do at this point,” he said. “Our production quality has stepped up, our schedule has been busy, and we’re opening our doors more and more. There’s something going on all the time at the Haven, and that’s always been something we’ve wanted — to keep the building open to the community.”

BLT is generating more revenue than ever in grants and ticket sales, and events are packed out, Sproles said. Actors are practicing now for “Peter Pan,” which goes onstage April 27-29 and May 4-6, and he expects the showings to sell out.

The boom times surrounding the Haven are why the arts commission passed on the money.

MAC Executive Director Malcolm White said the $82,000 grant is made up of “reconstituted” money — leftover cash awarded organizations were unable to utilize when the commission’s building fund was active from 2001 to 2007, back when the Legislature made annual contributions.

Almost a half-million dollars were left in the account when un-awarded grants tallied back up, and MAC decided to disperse the money by invitation to organizations with strong track records, White said.

“We’ve been very impressed with the work in Brookhaven, both because the organization has been a good grantee — they have done what they said they were going to do — and they have involved partners to create a real place for the community to gather around the arts,” he said.

White said Brookhaven is an important location for MAC in Southwest Mississippi, where the chance to partake in the arts beyond the bigger cities is weak. Outside of Brookhaven, Hazlehurst, McComb, Natchez and Woodville, delivering the arts to the rural areas is a challenge, he said.

“Brookhaven has been a real beacon of creative and artistic light in that part of our state, which has a great amount of need,” White said. “BLT was awarded $60,000 back in 2008 — it’s sad this program has ended, but it’s good for Brookhaven to get a second bite of the apple.”

White said BLT has also applied for an operating grant for 2019.

Senator, representative work together to get money for School of the Arts

Two Brookhaven lawmakers are trying to slide a little financial help to the arts school in the legislative session’s last... read more