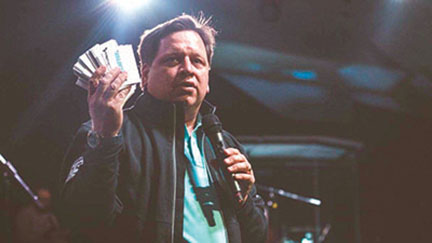 Dean Sikes’ mother attempted suicide when he was 21. Trying to end her life not only changed his, but also the lives of 2.3 million junior high and high school students he’s shared his message with in the past 26 years.

He’s bringing his “You Matter” message to Lincoln County to speak at several schools Monday through Friday, and to First Baptist Church Brookhaven. He’ll speak at the church’s Sunday service at 10:45 a.m. and teach a volunteer training session at 4 p.m. for youth ministry workers and parents. The training is open to the public and is free of charge. He’s also speaking Wednesday at 6:30 p.m. His target audience will be students who have been invited from all area schools, but his message is important for adults as well.

Rev. Greg Warnock said the Junior Auxiliary of Brookhaven is a main sponsor of Sikes’ visit because the speaker’s topic is one that students in Lincoln County should hear.

“Our young people are filled with anxieties and concerns that many of us did not experience,” he said. “They’re facing harms in schools, gun violence. Teenage suicide is on an increase in America.”

Sikes said more than 5,200 teenagers on average attempt suicide every day. That would fill most of the seats at the Mississippi Coliseum in Jackson. That’s why his ministry focuses on students 13 to 18 years old.

Sikes, of Chattanooga, Tennessee, told about a boy he met at a Christian school Thursday.

“A young man stopped me and said, ‘I want you to know your message really impacted my life today. Thank you for telling me that I matter,’” he said. “And he handed me a knife and said ‘I don’t want to hurt myself anymore.’”

“A young man walked up to me after I finished, handed me a 12-gauge shotgun shell and said, ‘I had planned on using this this afternoon to end my life, but I heard you tell me that I matter and I give it to you,’” he said. “And he handed me that shell.”

Sikes said he grew up in a strong, Christian family, but did not know God.

“The way he got my attention was when my mother attempted to end her life,” he said. “The very thing that changed my life when I was 21 years old, all of these years and decades later, that’s the very message that I have been commissioned to share with young people across this planet. In my belief, there is a real God who does love us and does have a plan.”

His mother travels with him to some of the 160 engagements he speaks at annually. He introduces her after he shares his testimony.

He expects to hit 75,000 signatures in Brookhaven.

“It will happen Monday morning,” he said. “We’ll go past it.”

The Ford’s big diesel throttled way down low when he shut off the crane. It had taken several pinches from... read more