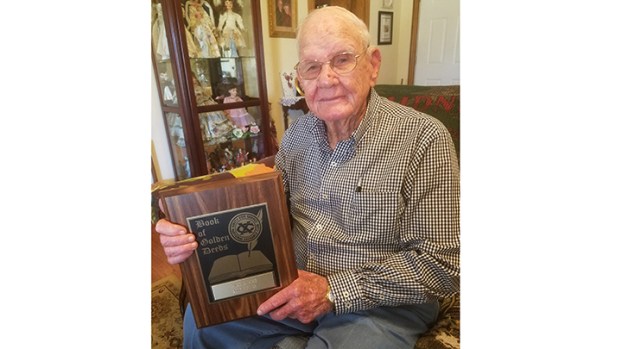 James Swager was staggered when the Brookhaven Exchange Club recognized him a decade ago for his Golden Deeds.

Swager, which rhymes with logger, had gone to the annual banquet as a guest. He didn’t know he would be the man of the hour.

The reasons were many.

The Exchange Club members chose Swager, who turned 92 this month, for his selfless attitude and embodiment of the club’s spirit.

Club members are looking for someone with those same qualities for their 2018 Golden Deeds award.

“We want someone who goes beyond their duty to serve their community,” said Ricky Lagrone, Golden Deeds committee chairman.

Nominations can be brief, as short as just a name, though it’s helpful to have contact information and a little bit of information why the nominee should be chosen, he said.

Lagrone said club members could choose someone but they would rather have the community suggest people who should be in the running for the award.

“It’s the kind of award we like the public to have an input on,” he said.

It’s sometimes difficult to find nominees who are truly worthy of the award because they hide from the limelight.

“Ninety-nine percent of them are that way,” he said. “They don’t do it for the honor. They don’t want any recognition. Most of them will say, ‘There are more people who deserve this award than I do.’”

Swager, a World War II Army veteran who fought in France, Italy and Germany, was picked for the award in 2007 because even though he had recovered from brain surgery to remove a malignant cancer, he continued to provide services to others, from house and mechanical repairs to rides to doctors for people who had no other way to get there.

This year’s winner will be recognized at the 71st annual Golden Deeds banquet April 27 at the Copiah-Lincoln Community College’s Billy B. Thames Conference Center. The banquet is for Exchange Club members, invited guests and past Golden Deeds winners.

Besides the Golden Deeds award winner, Exchange Club members will be honored with attendance and service awards and one outstanding member will receive the John L. Leary award.

Organizers hope to find someone who gives endless hours of their time and talents to make their community a better place to live. It’s important to choose a person who is sincere about helping the community, has an exceptional track record of continued, unselfish giving and enjoys volunteering to help others.

Homestead filings due this month — Lincoln County exemptions have a deadline of March 29 at 5 p.m.

Q: When is the deadline to file homestead exemption in Lincoln County? A: If a person has purchased a home... read more