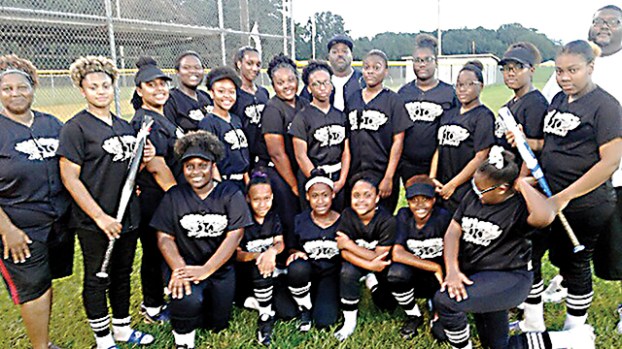 Daily Leader file photo/One of the softball teams from last year’s Dr. A. L. Lott Youth Sports league poses after a game. Registration for the league is now open, with baseball and softball clinics scheduled for the weeks of March 26-30 and April 2-6.

Training days for one of Brookhaven’s biggest sporting leagues is only a week out, but plenty of time remains for young members to join up.

The Dr. A. L. Lott Youth Sports program will hold its annual league clinic at the sportsplex of the same name March 26-30, and again from April 2-6, with two weeks of drills to get participants ready to pitch, hit and run for the long summer baseball and softball seasons. After enrolling a record group of 347 players in 2017, Lott organizers are expecting a big turnout this year, too.

“Hopefully, we’ll have enough to be able to create some new teams,” said program vice president Curtis Oliver. “We moved the season up two weeks, brought it out of May and into April, and that may have created some havoc with kids participating in extracurricular activities at school. We’re expecting some latecomers.”

The summer baseball and softball program is entering its ninth season of providing spring and summer sports like T-ball, coach pitch, little league, softball and boys’ senior league baseball to ages 4 to 16.

Though the program draws participants of all races and backgrounds, it is overwhelmingly utilized by black youth from Brookhaven, and league officials keep the registration fee down to $30 and rely heavily on sponsorship and volunteers to make the league work.

“In the community, there’s a disadvantage when it comes to economics, so we make it affordable for every child to be able to play,” said league president Roy Smith. “We have some real good local merchants and business owners who see the need and the concern in terms of providing the tools our kids need.”

Baseball and softball are the means, but citizenship is the end. Smith said the ultimate goal of the Dr. A. L. Lott Youth Sports program is to keep youth busy with sports throughout the idle summer months and teach sportsmanship, leadership and friendship as part of the ball field curriculum.

“We have positive role models, connecting kids with someone they can look up to,” Smith said. “I even remember my first coach, and that’s been 60 years ago.”

Smith said the league is in need of volunteers of every capacity — coaches, assistant coaches, umpires and concession stand workers. All volunteers must pass a background check.

“We won’t put any requirements on your time. If you’ve got 30 minutes, we’ll take 30 minutes,” Smith said. “Whatever it looks like for you.”

The league is also running a billboard campaign this season and is seeking sponsors to help offset the costs of equipment.