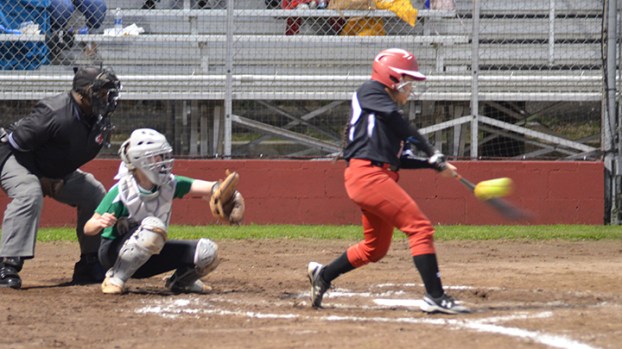 Photo by Dave Linton/Loyd Star’s Carson Hughey gets a hit in Tuesday night’s wide-margin victory over the Lady Bears of West Lincoln.

Taking advantage of errors by the Lady Bears, the Loyd Star girls jumped out front early, scoring five runs. They put the game away in the fourth inning, scoring another five runs.

“I think we did a lot better than what we have been doing,” said Lady Hornets senior Marley Poole. “We really improved on our hitting, and we played better together.”

The Lady Bears struck first. Sophomore Bailey Wilson reached first on an error and Bailee Goodson scored off of confusion by the Lady Hornets.

Malori Cade started things off for the Lady Hornets in their half of the first, hitting a single, and later scored off a Lady Bears’ error. The Lady Hornets brought in another run off a bunt from Carson Hughey and a Lady Bears error. Brooke Cade drove in two runs on her RBI double that found its way into shallow centerfield.

The Loyd Star girls got their final run of the inning across the plate before the Lady Bears could apply the tag on Aly Floyd at second base.

“I think my pitching went good,” Hughey said. “I need to work on some things. The defense did great and helped me out a lot.”

Coming in for relief in the second, Hughey kept the Lady Bears from scoring, as her defense backed her up and secured ground ball outs.

Trailing 5-1 heading into the third inning, the Lady Bears picked up their second run of the game. With Morgan Newman standing on second, thanks to her double, Averi Paden brought her in on an RBI sacrifice. Hughey limited the damage by producing a ground ball out to end the inning.

Batting in their half of the third, the Lady Hornets added to their lead. Poole found herself on third base, as the Lady Bears were unable to cleanly field her single. With Poole standing 60 feet away from home plate, Carly Beth Wallace brought her in on an RBI sacrifice. The West Lincoln girls were able to hold the Lady Hornets to just one run, as they managed to get out of the inning on a strikeout.

Batting in the bottom of the fourth with bases loaded and one out, Poole delivered for the Hornets, bringing in two runs on a hard-hit double. Wallace followed with an RBI single.

Cade brought in a run on an RBI sacrifice. Floyd finished the scoring for the Lady Hornets on an RBI double before the Lady Bears could record the final out, coming in the form of a strike out.

The Lady Bears attempted to make noise in the sixth inning, as Paden led off with a double. Jena Hughes followed with a single but was unable to advance the runners, as the Lady Hornets were able to strand them on a ground ball out.

The Lady Bears got three separate runners on base in the seventh and final inning. Goodson led off with a single. Wilson, with one out, also hit a single. Newman brought in the Lady Bears’ final run of the game on an RBI single, before the Lady Hornets could end the game on a groundball out. The Lady Hornets went on to win by a final score of 11-3.

“We hit the ball well tonight and I was pleased with that,” said Lady Hornets coach Jan Delaughter. “We’ve been playing against some good teams and good pitchers, so I think hitting the ball well helped us out tonight. We made less errors in the field and I think that was the difference in the game.”

Adi Paden started on the mound for the Lady Bears and took the setback on the rubber. Averi Paden pitched in relief.

Aly Floyd started for the Lady Hornets. Hughey came in during the second inning and pitched in relief.

The Lady Hornets, 3-5, 1-0 in 7-2A, will travel to Enterprise today as they take on regional rival Enterprise.

Any high school baseball coach will tell you two things when it comes to game play: treat every opponent like... read more