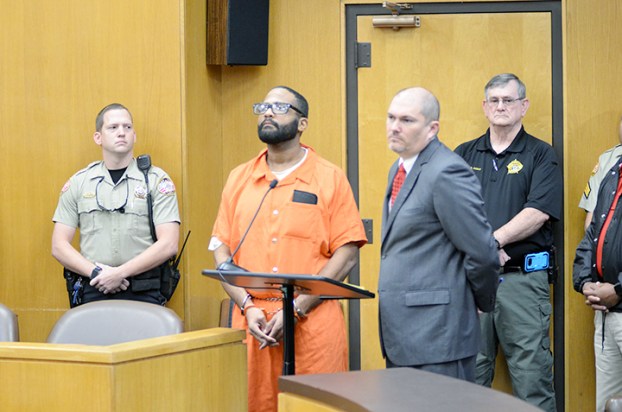 Could Godbolt trial be moved? Judge has many considerations if a change of venue is requested

After being hidden away in the Copiah County Jail for 10 months, murder defendant Willie Cory Godbolt stepped into Lincoln County’s main courtroom on March 12 to enter a plea of “not guilty” and begin the long path to judgment in a capital murder trial that could take months, if not years.

But there’s a possibility he may not set foot in that courtroom again.

After the short arraignment, public defender Jason Tate said he was “sure” to seek a change of venue, a legal move that could relocate the proceedings to any corner of the state in an effort to find a jury untainted by news coverage of the May 27-28, 2017 killing spree for which Godbolt stands accused. Where the trial could be moved, where such a jury could be found and if Circuit Judge David Strong will allow a change of venue are all questions that must be answered before the trial commences.

If Tate does seek a change of venue, his first opportunity will be at a scheduled status conference on May 3 at 9 a.m.

“Under Mississippi law, there are numerous factors to consider, which may include whether there has been an inordinate amount of media coverage, threats of violence toward the accused and whether it is a capital case based on heightened standards of review,” said Joel Smith, the district attorney for Hancock and Harrison counties, who shared his legal expertise with The Daily Leader since he is not involved with the case.

Godbolt’s case is a capital case.

Godbolt is also charged with first-degree murder in the deaths of Brenda May, 53; Toccara May, 35; Barbara Mitchell, 55; and Ferral Burage, 45. Godbolt is also accused of attempted murder for allegedly shooting at Lincoln County Sheriff’s deputy Timothy Kees, and is accused of kidnapping Xavier Lilly and another victim. He is accused of armed robbery for taking a 2015 Kia vehicle.

The section of Mississippi law dealing with pretrial proceedings lays the groundwork for change of venue motions and the requirements for their granting. The law leaves much to the discretion of the judge.

According to citation 99-15-35, Godbolt’s defense team would need to show affidavits signed by at least two “credible persons” stating the trial could not proceed fairly in Lincoln County because of prejudgment — the inability to find jurors who don’t already have their minds made up — or ill will to the defendant.

Godbolt’s case has received heavy media attention from The Daily Leader and news agencies across the state and nation. Finding any citizens in Mississippi ignorant of Godbolt’s case seems an unlikely task.

Judges consider two factors about media coverage when determining venue changes — the amount of adverse publicity for the defendant and whether or not it has been inflammatory, and its effect on potential jurors.

In State v. McCune, a Newton County murder trial decided in 2008 often cited by courts considering change of venue requests, the Supreme Court backed the lower court’s ruling against a change of venue, pointing out numerous potential jurors indicated they had read news accounts and seen TV coverage of the case, but only one indicated she had made up her mind about the case and was excused.

Another change of venue option Strong could employ is to keep the proceedings in Lincoln County but bring in an outside jury. Mississippi courts have previously sought to make the trial as familiar as possible, no matter which

“The court will typically seek a county that is similarly situated to the county wherein the alleged crime occurred,” Smith said.

No matter where it’s held, Godbolt’s trial could be a long one.

“A capital case can be a lengthy process because of the need for both sides to ensure that due process is given, and to ensure the trial is litigated to satisfy Mississippi law,” Smith said. “Considerations for the length of time it may take to complete the case are adequate time for the defense to prepare their case, completion of crime lab testing and the preparation and scheduling of potential expert witness evaluation and testimony for both sides.”

As for threats of violence toward Godbolt, none have been reported. Lincoln County Sheriff Steve Rushing said Godbolt has been housed at the Copiah County Jail since his arrest to avoid any potential conflicts of interest, since he is accused of killing a Lincoln County sheriff’s deputy.

The Lincoln County School Board has to start shopping for an appointed leader fast, because the price of superintendents is... read more