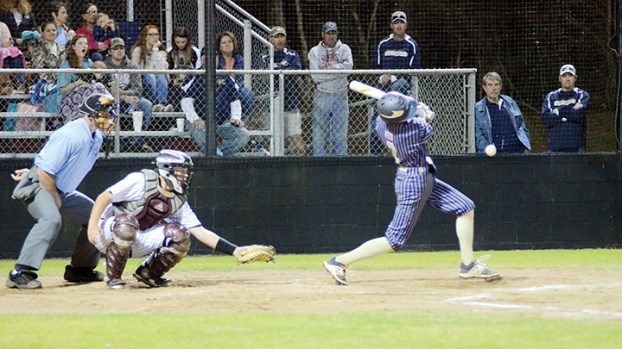 Photo by Dave Linton Bogue Chitto junior Bryce Langley tagged the ball for a single during the second game of Friday’s double header.

The Yellow Jackets would push one more runner over the plate in the added eighth inning, but Bogue Chitto managed to bring two runners home to pick up the slim victory.

“It was a good game and we played tough,” said Bogue Chitto senior Tucker Lambert. “Our pitching was good and we didn’t walk people. We made some tough outs and came in at the end of the game and made some really good pitches. Our teammates backed us up and it was a really good win.”

Bogue Chitto went first in the eighth inning and took the lead that would ultimately become the victory. With two outs and the bases loaded, sophomore Shaw King drove in a run with an RBI single. The Bobcats would score their final run off a wild pitch. Enterprise was able to get out of the inning with a strike out.

Batting in the bottom half of the eight, the Yellow Jackets managed to get one run across home plate. With bases loaded and two outs, junior Hunter Richardson brought in Enterprise’s final run of the game on an RBI single. Bogue Chitto got out of the inning with a ground ball, winning by a final score of 4-3.

“We came out hitting with two out strikes,” Lambert said. “We were able to hit the ball and put it in play and made Enterprise make some tough plays and errors. It was just a good game.”

The game started with Lambert going deep into centerfield with a triple. Senior Connor Price followed with a walk. With runners on the corners, senior Trey Nettles drove in the first run of the game on a single. The Bobcats managed to load the bases, but Enterprise stranded the runners, striking out the next batter.

The Yellowjackets threatened to score in the bottom half of the first, loading the bases with two outs. Bogue Chitto got out of the jam, striking out the next batter.

Enterprise found their way on base in the bottom half of the second on a two-out single by sophomore Dustin Prather. The Bobcats got out of the inning with a ground ball out.

Bogue Chitto added a run in the top of the third. Facing two outs, Price drew another walk. Nettles brought Price in on an RBI triple. Enterprise got out of the inning, striking out the next batter.

Yellow Jackets sophomore pitcher Austin Fugler settled down in the fourth inning, getting three up and three down. He cleaned off three more batters in the fifth inning.

Enterprise finally got on the board in their half of the fifth. With two outs and runners on the corners, sophomore Colby Beard brought in the first run on an RBI single. Sophomore Wyatt Burns followed with an RBI single of his own, before Bogue Chitto recorded the final out on a strikeout.

After getting three up and three down in the top of the sixth, the Yellow Jackets attempted to break the 2-2 tie. A costly mistake cost them the chance, as Fugler was caught in a run down between third and home and eventually tagged as he retreated.

The game went into extra innings, where Bogue Chitto prevailed.

“The kids hung in there and battled really well against a very good pitcher,” said Bogue Chitto coach Gareth Sartin. “We came up with timely hits when we needed to. We played great defense behind our pitchers. Couldn’t be prouder for the kids, that was a big win.”

Nettles started on the mound for the Bobcats. Lambert pitched in relief.

The Enterprise Yellow Jackets seemed to have spent all their energy in game one’s 4-3 loss, as Bogue Chitto romped through an easy 10-0 win in the double-header’s second contest.

The Bobcats gave Enterprise the gift of mercy, finishing up game two in five innings after jumping out front and never looking back. Bogue Chitto put six runs across home plate in a big fourth inning to secure the win.

“We came out on the sticks,” said Bogue Chitto senior Trey Nettles. “We were hitting the ball really well. “We didn’t make that many errors — I think we made just one error.”

Batting in the top of the first with one out, junior Bryce Langley got things going for the Bobcats with a single. Looking at two outs, senior Connor Price delivered a double. Nettles followed with an RBI single. Bogue Chitto would score their next two runs on an error before Enterprise could get out of the inning.

Pitching for Bogue Chitto, Nettles sat Enterprise down in order in the first. The Yellowjackets returned the favor by striking out all three Bobcats batters in their half of the second.

“We played outstanding defense,” Nettles said. “I pitched the ball and threw strikes, they hit me but we just made good plays.”

In the bottom half of the second, Enterprise managed to get one runner on base as junior Landon Gartman hit a single. The Bobcats stranded Gartman, getting the next three batters out.

Bogue Chitto increased their lead in the third inning. With one out, senior Tucker Lambert made his way to first base after being hit by a pitch. Sophomore Shaw King brought Lambert in on an RBI single before the Yellow Jackets could get the final two outs of the inning.

Lambert sat Enterprise down in order in the bottom of the third, getting a fly out, pop up and a ground ball out.

The Bobcats finished the slaughter in the fourth inning by scoring six runs. Sophomore Ethan Gladden led off with a single. Junior Darius Porter followed with a single of his own. Sophomore Koltin Roberts moved the batters over on a bunt sacrifice.

With one out, Langley brought in two runs with a two-run RBI single. Bogue Chitto loaded the bases with two outs. Nettles came up big for Bogue Chitto, nailing a bases-clearing double. King finished off the scoring with an RBI single.

Enterprise tried to keep the game going in the bottom of the fourth. Junior Hunter Richardson reached first on a Bobcat error. Gartman hit safely with a double. Bogue Chitto ended the game getting the next two Yellow Jacket batters out, off a pop up and a strike out, to pick up a 10-0 shutout win.

“Momentum from game one carried over to game two,” said Bobcats coach Gareth Sartin. “We got off to a great start in the first inning with some big two-out hits. That really got our offense going. Nettles pitched a great game. We played solid defense both games and I’m really pleased with our kids. The big hits were the difference in the ball game.”

Enterprise coach Cass Brister said Bogue Chitto outplayed his team in every phase of the game.

“They pitched better than us, played better defense than us and hit better than we did,” he said. “I thought they wanted it more than we did and played harder than we did. It happens, and we have to flush this from our memory and get ready to play next week. I feel like our kids will respond.”

Gunther pitched all five innings for the Bobcats, giving up two hits and striking out four batters.

Sophomore Colby Beard started on the mound for Enterprise. Junior Hunter Richardson came in during the fourth inning and pitched in relief.

Enterprise, 9-3 overall and 4-2 in region 7-2A, will host regional rival Loyd Star for game one of a three-game series today. Games two and three will also be at Enterprise on Friday.

Bogue Chitto, 5-6 overall and 2-4 in region 7-2A, will also be in action today, as they host regional opponent West Lincoln for the first game of a three-game series. Games two and three will also be at Bogue Chitto Thursday.