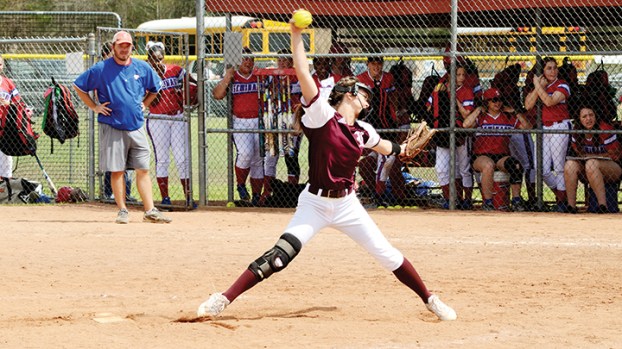 Photo by Dave Linton/Enterprise eighth-grader Natalie Harris pitched in relief for the Yellow Jackets, allowing only two batters on base.

Playing game one in the South Jones Softball Tournament, the Lady Yellow Jackets of Enterprise pulled out the big bats to bludgeon Seminary 15-1.

“We did really well hitting the ball,” said Lady Yellow Jackets senior Jana Nations. “We were able to adjust to the slow pitching and sit back and wait on it.”

Lady Yellow Jackets senior Carly Polk got things started with a single. Senior Carlee Nations did her job, moving Polk over to second base on a sacrifice bunt. Eighth-grader Abby Richardson scored the first run of the inning, bringing Polk home on an RBI single.

Jana Nations brought in the second run off an RBI single. Freshman Lauren Gartman followed with a double. Sophomore Kalie Burges finished the scoring off with an RBI sacrifice before Seminary could record the final out.

The Lady Bulldogs scored their only run of the game in the bottom of the first off an RBI sacrifice by Senior Vivica Gibbs.

The score remained 3-1 heading into the top half of the third inning. Batting in their half of the third, the Enterprise girls brought seven runs across home plate. Gartman started the scoring, connecting with an RBI double.

Burgess connected with an RBI single. Sophomore Belle Porter added to the scoring drive with an RBI single. With two outs and the bases loaded, Richardson found a gap in the Lady Bulldogs’ defense for a bases-clearing double before Seminary was able to record the final out.

Pitching in relief for the Lady Yellow Jackets, eighth-grader Natalie Harris kept the Seminary girls off balanced throughout the rest of the game, allowing only two batters to reach base.

In the top of the fifth, the Enterprise girls loaded the bases with no outs. Burgess brought in a run on an RBI single. With two outs and the bases still loaded, Harris hit a single to bring in a run. Polk finished the scoring for the Lady Yellow Jackets with an RBI single. Enterprise won the game by a final score of 15-1.

“I’m really proud of Harris, she did really well and pitched a great game,” said Lady Yellow Jackets coach Tyler King. “We hit the ball very well and believe in each other. That’s one thing as a team, we have the confidence in one another and we’re just clicking right now, and we want this to keep going as we progress through the season.”

“I felt like I did good pitching and was able to hit my spots.” Harris said.

The Enterprise Lady Yellow Jackets, 7-3 overall and 2-0 in region 7-2A, will travel to Bogue Chitto Thursday for a region matchup.