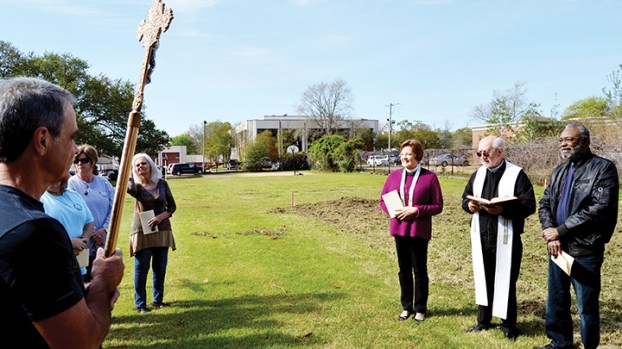 Organizers pray the seeds planted in the Brookhaven Community Garden will grow friendships as well as groceries.

Father Henry Shelton of St. Francis of Assisi Catholic Church — with help from Rev. Anne Matthews with the Episcopal Church of the Redeemer and Rev. A.C. Herring from Holy Trinity Family Baptist Church — offered prayers recently for a bountiful harvest from the rows that make up the garden.

The garden is located beside the education center across from the church at 227 East Cherokee St. It includes four small raised beds and there is room for six 60-foot rows.

A free “lease” of a row or bed is available on a first-come, first-serve basis, said organizer Pat Nelson.

The garden will create a place for weeders and sowers to piddle along the rows.

The Brookhaven Board of Aldermen in December approved Nelson’s concept for the garden, which would have been developed in a vacant lot on Jackson and West Congress streets that belongs to the city.

Then the rows got covered in red tape.

Nelson and Shelton worked together to get the garden plans moved to the corner of the fenced playground next to Bob’s Sandwich Shop.

“We had an agreement within a few days,” Nelson said. “It was the easiest thing ever. The mayor and aldermen supported it and helped us along as they’ve done from Day One. Father Henry loved the idea that half the produce will go to their food pantry.”

Gardeners will sign a yearly contract to give half their harvest to St. Francis’ food pantry in the old Serio’s Grocery Store on South First Street. The store was donated to the church in 2017.

The agreement also requires that gardeners must keep their row weeded and attractive to passers-by and must not intrude on each other’s assigned spaces.

Produce from the community garden cannot be sold or bartered.

“Every one will get to know each other and it will be a place to gather,” he said.

He said the area will be ideal for city dwellers who don’t have a sunny spot to garden.

“It’s for rich, poor, black, white, young and old who don’t have a place of their own to plant a garden, and love to see things grow,” he said. “It will be a gathering place in the community for folks who like to get their hands dirty.”

Produce will be collected at the St. Vincent de Paul Food Pantry for distribution on Friday mornings.

“Each gardener will take their stuff over there in boxes or bags on Thursdays,” he said. “It’s an honor system.”

Shelton said he hopes the garden will bring awareness to those who go hungry in the community and the abilities of others to meet the needs with kindness.

“Working together and building community, working with our hands in the earth, and realizing that we all come from the earth. We have more in common than we have that divides and separates us,” he said. “It’s a seed that’s not only planted in the ground, but also a seed that hopefully is going to be planted in our hearts.”

To adopt a row, visit Brookhaven Community Garden on Facebook or email brookhavencommunitygarden@gmail.com.

Deputies are looking for a quartet of alleged thieves who broke into a dollar store to steal smokes, but didn’t... read more