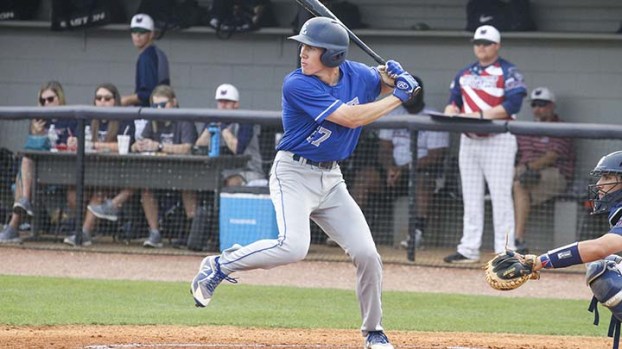 The bats were hot for the Wolves on Tuesday night as Co-Lin racked up 19 hits in the 8-5 and 14-4 victories. The wins allowed the Wolves reclaim “The Bat,” the trophy that goes home with the victor of the Coca-Cola Challenge. Co-Lin is now 14-7 on the year and 3-5 in MACJC play. The Wolves are back in Wesson on Friday, March 30 as Co-Lin faces Northwest Community College. Fans can watch the games live at colinathletics.com or listen live at WMJU 104.3 FM in Brookhaven.

The early frames of game one were a pitching duel as Southwest’s Matthew Graves and Co-Lin’s Austin Tidwell controlled the tempo from the rubber.

Ryan Zimmerman led off the fourth and got hit by a pitch, and the Wolves looked to capitalize. Zimmerman, a speedy freshman, stole second and moved to third on an error. Mark Hubbard got Zimmerman home at the next at bat with a sacrifice fly to center. Co-Lin led 1-0 going into the bottom of the fourth.

A leadoff double, followed by an RBI single put the Bears on the board in the bottom of the sixth and tied the game at one.

In the eighth, Chandler Dillard drove Jaylyn Williams in on a groundout and C.J. Estave got to cross the plate for free after a Southwest balk. The Wolves led 3-1 going into the bottom of the eighth.

Another leadoff double, followed by four RBI singles, three of which were in a row, swung the momentum and the lead into the Bears favor. After the explosive inning Southwest led 5-3.

Co-Lin refused to give in as Williams drove in Thomas Slagle in the top of the ninth to start a late rally. A Southwest error allowed Craig Bradley and Williams to cross the plate giving Co-Lin a 6-5 lead.

RBI singles from Zimmerman and Tidwell padded the Wolves lead. Co-Lin was up 8-5 going into the bottom of the ninth.

Zach James entered the game for the Wolves and surrendered just one hit in the bottom half of the frame to secure the win for Co-Lin. The brief outing gave James the win. Zach Smith, Parker Lee, and Justin Hutton all put in work on the mound in relief out of the bullpen.

Bradley, Williams, Tidwell, and Zimmerman each collected two hits to lead the Wolves at the plate. Co-Lin was aggressive on the base paths as the team stole eight bases during the game. Zimmerman led the way with three.

The nightcap was much more fast paced as the Wolves plated a run in every inning of the contest. Austin O’Flynn got things started with a single in the top of the first. The sophomore scored later in the inning on a throwing error to give the Wolves an early lead.

Southwest fired back in the bottom of the first with an RBI double and a pair of RBI singles to jump to a 3-1 lead after one complete inning.

Thomas Slagle tied things up in the second with a hard ground ball up the middle. The shot scored Ryan Zimmerman and Chandler Dillard who reached base on back-to-back singles.

The back-and-forth action continued in the second after a passed ball scored one for the Bears and gave Southwest a 4-3 lead.

A passed ball and a sacrifice fly from Dillard once again put the Wolves on top, 5-4, in the top of the third.

Jaylyn Williams launched a two-run homer over the left field wall in the fourth, and Zimmerman roped a triple to right that plated C.J. Estave stretching Co-Lin’s lead to 8-4 going into the bottom half of the fourth.

The Wolves’ final runs came in the top of the fifth when three straight walks loaded the bases for Co-Lin. Williams was hit by a pitch to score one, Estave drew a walk to score another, and Zimmerman hit his first collegiate grand slam to break the game open, 14-4, in the Wolves favor.

The momentum from the towering Zimmerman home run pushed the Wolves across the finish line as Anthony Clapp shutdown the Bears in the bottom of the fifth to finalize the 14-4 run-rule victory.

Zimmerman, Estave, Slagle, and Dillard each collected multiple hits for the Wolves. Zimmerman went 3-for-3 at the plate to lead Co-Lin in hits.

The Lady Cobras of Wesson forced Franklin County to beg for mercy Monday night, scoring a pile of runs in... read more