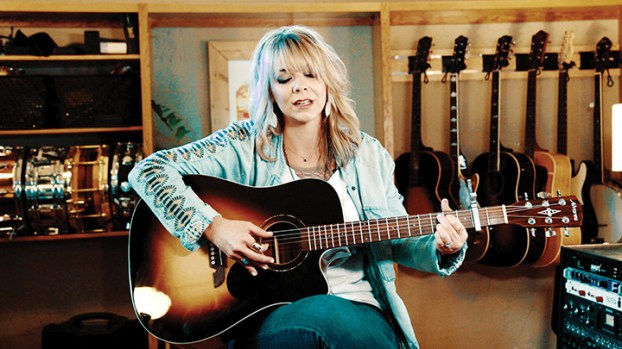 Photo submitted/Andi Cotten will make her fourth appearance at Music and Art in Trinity Park April 5.

Though this will be a Union Church songwriter’s fourth appearance at Music and Art in Trinity Park when the spring event resumes April 5, it will be a first of sorts for a new and improved Andi Cotten.

Cotten, 38, will be debuting her new single, “Tinted Blue,” that is also the inspiration for her Facebook page, Tinted Blue Music.

The hour-long event kicks off at noon at the park located at 230 W. Monticello St. next to Episcopal Church of the Redeemer.

She recorded the single at Blue Sky Studio in Jackson and filmed a video for it as well.

The song puts Cotten’s Christian faith in the forefront and pushes her in a new, welcomed direction. During the recording process, Cotten received several requests to sing and speak at women’s ministry events.

A wife, mother and church worship leader, Cotten has been excited by the possibilities.

“That’s what I would love to do with my voice, is women’s ministries,” she said.

She hopes “Tinted Blue” inspires women to find their own beauty from within themselves, to find the talent that God has given them and to realize that only Jesus is perfect.

“There’s a line in it, ‘She shimmers like a diamond, tinted blue,’” she said. “That was taken from being an aquamarine birthstone. Also, it’s like a diamond — she’s valuable and she’s beautiful and all that, but she’s flawed. The blue represents the flaws.”

Cotten is a mother of 11-year-old twins and a 5-year-old, all boys. She and her husband have been married for 17 years. She leads music at Union Church Baptist Church. She played with the Cotten Bridge Band for a while, but her music is taking her into a different direction.

She hopes to share her testimony with her songs.

“My voice wasn’t something I’ve done on my own,” she said. “It was given to me as a gift. I feel like I should use it for that purpose. There is a message in it that is more about God than about me.”

She is approaching this musical stage of her life in a more laid-back fashion.

Earlier in her career, she had never played in a band, never had a CD and never performed at festivals. So she did.

“I just wanted to do everything that I could to say I did it, and now I have,” she said. “It didn’t really expose me to what I needed to be exposed to.”

She is putting herself out there as a musician and speaker available for women’s ministries.

“I just feel like if I say yes to the right thing, then the next right thing will be added. I don’t have to put out my name, and push myself on people and beg people to buy my music. If I’m working in the right direction, it’s going to work out,” she said.

Cotten will have copies of “Tinted Blue” available for sale at Music and Art at Trinity Park. The song will also be available on iTunes and Amazon.

Artists are also encouraged to participate in the events by working on pieces while musicians play.

Shaw Furlow, one of the event’s organizers, encourages the public to bring chairs and blankets, and spread out in the park to enjoy the concert, while watching the artists demonstrate their crafts. Concerts will be held each Thursday at noon in the park.

To get involved with the Music and Art in the Park series, contact Furlow at shaw.furlow@yahoo.com.