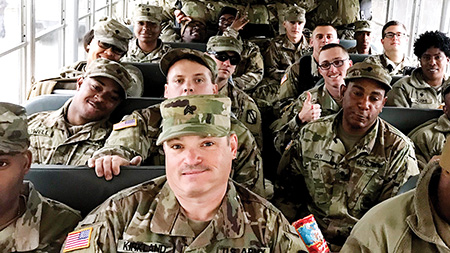 Photo submitted/Some soldiers with India Co. 106 left for Fort Bliss, Texas, earlier this month to participate in a three-month training exercise before completing their year-long deployment in Kuwait. The rest left Tuesday to join them. The Family Readiness Group hopes people across the county will buy yellow ribbons and display them until the troops return.

The families of troops who deployed from the Brookhaven Army National Guard Armory this week hope to cover Lincoln County in yellow ribbons until their safe return.

Members of the Family Readiness Group are making ribbons to sell for about $2 each, depending on the size requested, to help fund projects like care packages for soldiers and family support.

The ribbons also let anyone traveling through Lincoln County know that this area has troops deployed.

India Co. 106 left for Fort Bliss, Texas, Tuesday for a 90-day training exercise before they’ll head to Kuwait for the rest of its year-long deployment.

“We encourage people to put them on their mailboxes, porches, front door, trees. Anywhere that is out where somebody can see. That’s what we want,” said Dusti Smith, vice president of the FRG. Smith and her husband, Spec. Dylan Smith, are expecting their first child, Easton Burke Smith, in August.

The Brookhaven couple hope he’ll be able to come back for the birth and Smith would like to see yellow ribbons all over the place if he does.

Yellow ribbons began appearing nationwide at the start of the Gulf War and signify a hope for safe return by deployed troops.

“It brings awareness that there is a deployment in our community and we are willing to support them,” she said.

She and FRG President Lori Byne, wife of Spec. Joshua, of Brookhaven, wanted to bring back that tradition.

She remembers seeing ribbons when troops from Brookhaven deployed years ago.

“We knew, our parents taught us, the ribbons meant we should support our troops because they were deployed. That kind of stuck with us,” she said.

As military spouses, they have participated in Yellow Ribbon ceremonies.

“There are deployments in our community and we want people to know that and be praying for them and be willing to support them,” Smith said. “For us it means support our troops and bring our troops home.”

Smith said some of the money from sales of the ribbons will be used to send care packages to the troops when they arrive in Kuwait in three months. The FRG is looking for volunteers willing to write to soldiers from the Brookhaven unit who may not have a family member sending mail. India Co. 106 includes soldiers from Brookhaven, but also troops from around the state who are part of the local unit.

Smith said it was tough to watch her husband leave Tuesday.

“It’s not easy at all,” she said. “As a spouse, you make a lot of sacrifices through this, just like they do. You’re going to have your days you break down but you’ve got to stay strong and have faith that they’re coming back. This is what God planned for them to do. This is part of their journey.”

Smith takes comfort knowing her husband is a hero.

She is thrilled when she sees a yellow ribbon on a business’ front door.

The 142 troops of India Co. are part of more than 4,000 Mississippi National Guard soldiers who will be in the Middle East in support of Operation Spartan Shield. The 155th Armored Brigade Combat Team is supposed to deter and react to threats in the Middle East.

This will be the unit’s third deployment to the Middle East since 2001. The Dixie Thunder brigade possesses expertise from deployments during Operations Iraqi Freedom III in 2004 to 2005, and OIF 9.2 in 2009 to 2010.

The brigade is based in Tupelo, with units in McComb, Senatobia, Starkville, Amory, Monticello and Meridian, as well as in Kansas City, Kansas.

Yellow ribbons will also be available for purchase at The Daily Leader office starting Monday.

Wesson shop not washed out in fire — Shop…