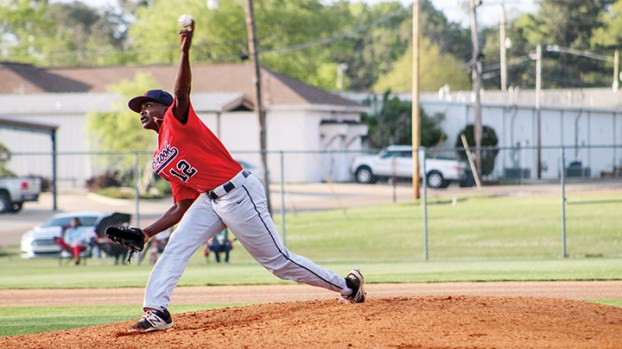 Photo by Emily Phillips/ Panthers sophomore Byrion Robinson hurls from the mound in game one against Forest Hill.

Brookhaven High’s Panthers demolished Forest Hill’s Patriots in both games of a double header on Tuesday night. The Panthers ended the first game 25-0 after a long three innings, and the second game was called within the first inning due to impending weather. Brookhaven was up 15-0 in the bottom of the first with zero outs when the umpires signaled to end the game. After bringing home the two wins against Forest Hill, Brookhaven moves to 6-1 in district play.

Much like the game against Wingfield, the Panthers aimed to make short work of Forest Hill, and that’s exactly what they did. Racking up a total of 40 points in the double header series made it abundantly clear BHS would walk away with a Senior Night victory.

“In a game like this, and being up by this much, you really are looking forward to the next game more than anything,” said senior shortstop Clint Stephens. “Also, it’s really hard to stay focused in a game like this, so I worked on that and just played baseball.”

The Panthers took advantage of this game by utilizing it as a glorified practice. Most of the players were relying on easy at-bats and on-base scenarios to further better their stats. But with the pitching coming from Forest Hill, it was nearly impossible. In the total four innings that were played throughout the night, at least 10 batters were hit by a pitch — many players more than once.

The run rule had been reached in the first inning in both games, but the rule indicates that three innings must be played before the game can end. With the run rule taking effect early on, BHS began to do whatever it took to get to the end of the inning — swinging at junk pitches, walking the bases instead of running them and bunting.

“Playing baseball and treating this team the same as any other is how we needed to play tonight,” said senior pitcher Trace Owens. “Using this game to my advantage and working on my entire game is what I tried to remain focused on.”

Insight on the game from the senior players was pretty consistent across the board. None them wanted to lose any type of focus just because the team they were playing was significantly less sound at baseball then they were.

“I feel like everyone played well and did what they were supposed to do,” said senior left-fielder Logan Emfinger. “We treated this game like it was our last and played it like any other district game.”

As expected, almost every member of Brookhaven’s team had multiple runs. A few players had infield home runs, and a couple of players made it all the way home on errors. Multiple players were hit by pitches, and there were more walks than hits. Each member of the team saw time on the field and spent time on-base. Sophomore Byrion Robinson pitched all three innings of the first game, and he pitched a no-hitter with eight strikeouts. Owens pitched the first and only inning of the second game, and he also pitched a no-hitter with one strike.

“You want to stay away from injury, get some guys in the game who haven’t gotten the opportunity to play, and get out of here early,” said Coach Matt White. “Those two wins got us tied with Natchez, and we want to go and take back that victory at their place next week.”