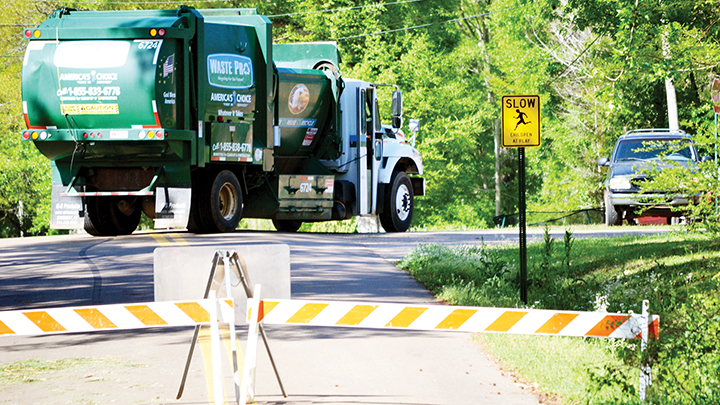 Photo by Donna Campbell A Waste Pro truck makes the rounds on Williams Street in Brookhaven.

Although the city wants to dump Waste Pro as its debris remover, the company is not ready to let go of the contract.

Aldermen voted March 6 to cut the debris portion of the contract, choosing to do the job with its own trucks and employees. Waste Pro would continue to hold the contract for trash pickup until Oct. 1.

“Waste Pro has come back to us and are wanting a sit-down,” Cox said. “We don’t know what they want to ask.”

In the meantime, the city is running its own routes to pick up vegetative debris, he said.

Aldermen are also opening the doors to other waste management companies, accepting bids through May 1 for consideration.

Advertisements for bid proposals will be published Tuesday and April 17.

“If we change contractors, they would have to get their equipment in here,” he said.

No matter who takes out the trash, the city will still be picking up its own debris. They had been doing it themselves until making the switch to Waste Pro in February 2015.

It was a trial run that didn’t work out, Cox said.

Supervisors in February expressed their eagerness to find a company that can do a better job.

“Right now, what we got is not working. We have to get out and get it,” said District 1 Supervisor Jerry Wilson, who is also board president.

Supervisors generally contract with garbage pick-up providers on three-year contracts with an option to extend another three years. In September, Waste Pro will reach the end of an extended six-year contract and have the option to compete with other trash disposal companies for a new three-year deal.

In the Feb. 20 meeting, supervisors claimed numerous missed pick-ups all over the county and problems with trucks turning in private driveways.

Evidence, science are focus on Day One of Cordarryl…