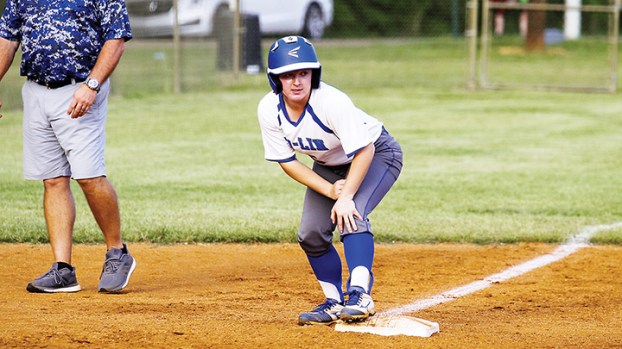 Photo by Co-Lin Sports Information/Co-Lin’s Morgan Dubose, a freshman from Canton, readies to advance through the bags in a game from earlier this season.

The Lady Wolves of Copiah-Lincoln dropped a pair of MACJC contests to No. 8 East Central Community College Wednesday afternoon. The losses move the Lady Wolves to 17-16 on the season and 8-10 in MACJC play. The Lady Wolves are on the road Saturday as Co-Lin travels to Moorhead to take on the Mississippi Delta Lady Trojans.

“These were tough losses against a No. 8 ranked team,” said Co-Lin head coach Allen Kent. “Walks and a couple of costly errors let them back in these games. Makenzie Gros and Christian Black both pitched well enough to win.”

The Lady Wolves got on the board early in game one as Alex Anthony reached base on an error in the first inning. The sophomore scored a few batters later after the Lady Warriors committed their second error of the inning.

Co-Lin stretched the lead to 3-0 in the top of the second after Morgan Dubose led things off with a walk. Paige Hulin followed with a single, and the pair was moved to second and third with a sacrifice bunt from Tori Pettit. Abigail Thornton ripped an RBI single to right to drive the two runs.

ECCC fought back in the bottom of the second and tied the contest at 3-3 after an error, fielder’s choice, and ground out all resulted in Lady Warrior runs.

The Lady Warriors took their first lead, 4-3, in the bottom of the fourth after a single and three walks resulted in a go-ahead run.

A pair of singles and another walk stretched the Lady Warriors lead to 7-3 in the bottom of the fifth, and an RBI double in the sixth gave ECCC the 8-3 final score.

Bailey Root took the loss for the Lady Wolves. Root went four and a third innings, allowing seven runs on five hits and striking out three.

Despite a six-run deficit in the sixth, the Lady Wolves sent the game to extra innings.

“We dug ourselves in a hole with two walks and three errors in game two,” said Kent. “We came back with a string of base hits. Unfortunately, another error cost us the game in extra innings. We showed a lot of grit and character coming back, but we must cut down on errors and walks.”

No. 8 ECCC took advantage of a pair of errors and an RBI single in the bottom of the first to get an early 4-0 lead.

The Lady Warriors grew that lead to 5-0 in the fourth with an RBI single, but Co-Lin scratched one across in the top of the fifth to cut the lead to 5-1. The run came on a Paige Hulin single that plated Bailey Root who doubled.

Another error and a single in the bottom of the sixth scored two more for the Lady Warriors and stretched the lead to 7-1.

The Lady Wolves roared back in the top of the seventh. The productive inning started with five straight singles, three of which were RBI singles from Alexsundria Thomas, Allison Livingston, and Taylor Bryant. An RBI from Alex Anthony and yet another RBI single from Julie Scheuermann knotted the game at 7-7.

ECCC loaded the bases in the bottom of the seventh, but Christian Black forced a pop fly and a strikeout to get out of the jam and send the game to an extra frame.

Co-Lin was unable to plate a run in the eighth, and the Lady Warriors got a base runner with a leadoff walk. Madalyn McMahon stole second, and scored on an error to win game two 8-7.

Kaitlyn Oswalt led No. ECCC to victory in the circle. She allowed one hit and one run over two innings, striking out one.

Christian Black took the loss for the Lady Wolves after she went four and a third innings, allowing three runs on five hits and striking out six.

Mackenzie Gros started the game for the Lady Wolves, and surrendered five runs on six hits over three and a third innings, striking out one and walking one.

Co-Lin scattered 11 hits in the contest. Hulin and Pettit each collected two hits to lead the Lady Wolves at the dish.

The Enterprise Yellow Jackets plunged a stinger into West Lincoln Tuesday night, popping the Bears in the first of a... read more