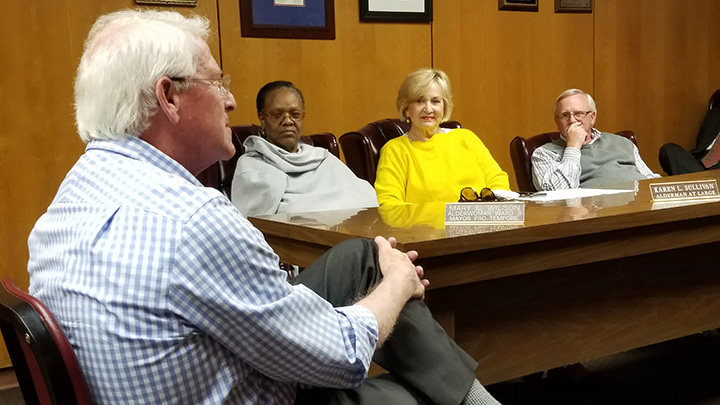 He spent the evening rubbing-elbows with check-writers at a private fundraiser for the Lincoln County Republican Committee.

It was a busy day, he told the Lincoln County Board of Supervisors at his fourth stop of the day.

“My wife Gayle’s with me. She’s enjoying the room,” he told the supervisors, then glanced back at his assistant. “Where are we staying?”

“You can almost see it from here,” he said.

“She’s quite pleased,” Anniston told him.

Wicker listened to supervisors’ complaints about roads and bridges and the need for more funding. He nodded to Anniston often to make sure he was taking good notes.

District 4 Supervisor Eddie Brown stopped Wicker as he made his way to the door to head down the hall to see the Brookhaven Board of Aldermen.

“Something we didn’t bring up that was supposed to be a topic is our industrial park out here. We have an industrial park that’s been sitting here empty,” he said. We’ve got a spec building out there. Everything goes north of Jackson. We need something south of Jackson.”

“Let me tell you. You’ve got your own United States senator now,” he said. “Things may be looking up for Southwest Mississippi.”

Earlier in the day, after speaking to civic clubs at the Brookhaven Country Club, Wicker talked about U.S. Sen. Cindy Hyde-Smith, of Brookhaven, who recently stepped down as state commissioner of agriculture to accept Gov. Phil Bryant’s appointment to replace retired U.S. Sen. Thad Cochran.

“Having a great record as a state senator, I think she should just go with her instincts. She was a very effective, conservative member of the state senate and obviously a lieutenant of (then) Lt. Gov. Phil Bryant, and someone that he greatly admired.”

Wicker said Hyde-Smith should “go with her instincts” and listen to her constituents.

“She’s going to be back tending to those cows most every weekend and she’s going to know almost more about agriculture than anyone else because she’s lived it,” he said. “She’ll be an effective participating member of the majority party from Day One. I think she’s going to do great.”

The junior senator was also a topic of conversation with the city.

“How do y’all like Cindy Hyde-Smith?” he asked, rhetorically.

“She’s the real deal, there’s no doubt. That was a home-run pick on his part,” Brookhaven Mayor Joe Cox said of the governor’s choice.

“Y’all have done amazing work here, and Brookhaven is just a model small town,” he said, before posing for a group photo. “You’re really to be congratulated.”