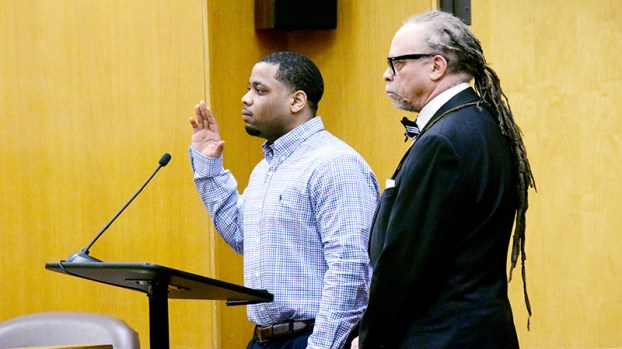 Photo by Adam Northam/Cordarryl Bell, is sworn in Thursday to testify in his own defense in the Aquarius Nelson murder trial. Pictured are, from left, Bell and attorney Imhotep Alkebu-lan.

MISTRIAL – hung jury has no verdict after four-hour deliberations

Prosecutors will have to make another attempt at convicting Cordarryl Bell for murder later this year after the proceedings against him ended in a mistrial Friday afternoon.

A hung jury returned to the courtroom with no verdict at approximately 2 p.m. after deliberating for just shy of four hours. Circuit Judge Michael Taylor asked the jurors if more time would make a difference, but all 12 declared further deliberations would not be helpful. Taylor declared a mistrial and set the next trial date for Sept. 25.

Defense attorney Imhotep Alkebu-lan said the state failed to disprove Bell acted in self-defense when he shot and killed 26-year-old Aquarius Nelson on Nov. 2, 2015, citing the testimony of Joshua Cole and Andrew Fortson as damaging to the state’s case. Cole testified he drove Nelson to the home at 115 Walnut St. to collect a debt from then-owner Andrew Fortson, and later to King’s Daughters Medical Center after Bell emerged from the home and shot Nelson four times.

Day Two testimonies between Cole and Fortson didn’t line up — Fortson told the court he didn’t know Nelson and owed him no money. Alkebu-lan hammered on the discrepancies in closing arguments Friday morning.

“Cole’s credibility, Fortson not knowing Nelson, and that’s (the state’s) main witness,” Alkebu-lan said. “It just was not credible.”

Bell’s grandfather, former Brookhaven firefighter Moses Bell, said the family is “proud of the decision the court made.” Bell had around 10 family members supporting him throughout the three-day trial.

Shanitra Humphrey, whose late husband Kelcay Humphrey was kin to Nelson, said the family believes Bell should have been found guilty.

“I think everything was unfair,” she said. “Knowing that some of the stuff said was lies, and it just wasn’t fair.”

In closing arguments earlier Friday, Bates reminded the jury Bell’s testimony contradicted with several other testimonies, including that of forensic experts. He reenacted the cross-pulling motion the defendant said Nelson made that caused him to open fire, pointing out how the entry and exit wounds on Nelson’s body made Bell’s version of events impossible.

“There was absolutely no justification. (Nelson) was shot down like a dog in the street,” Bates said. “He had no idea when he was walking up to that door he had only seconds to live, at 26 years old.”

Alkebu-lan used his 15-minute closing argument to attack the testimonies of Cole and Fortson.

Alkebu-lan said Nelson and Calvin Haynes — Cole’s older brother, whom Bell alleges was the driver of the circling white Chrysler 300, not Cole — drove back to Nelson’s home on Independence Street to rid the vehicle of weapons before Cole get behind the wheel to drive the dying Nelson to KDMC. He alleges a 911 call was made from the home on Independence Street, but did not enter audio of the call into evidence.

Bell: ‘He was gonna shoot me’ — Defendant explains his side of fatal shooting, prosecutors hit back hard

Cordarryl Bell took the witness stand in his own murder trial Thursday, telling the court he fired 11 shots at... read more