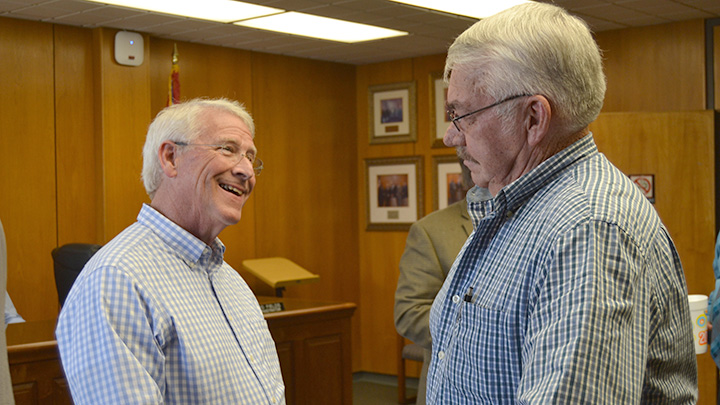 Photo by Donna Campbell/U.S. Sen. Roger Wicker spoke to the Lincoln County Board of Supervisors briefly Thursday before heading across the Lincoln County Government Complex to meet with the Brookhaven Board of Aldermen. Pictured are, from left, Wicker and District 3 Supervisor Nolan Williamson.

U.S. Sen. Roger Wicker’s SUV rolled over a lot of paved miles Thursday traveling through Lincoln County. Supervisors and aldermen asked him to find money to pay for them.

The senior senator spent Wednesday in McComb and Natchez and Thursday in Brookhaven. While in town to speak at a Republican fundraising function Thursday night, he took the time to tour McLane Southern, a grocery and foodservice supply company that employs about 400 people, speak to civic clubs, visit the Brookhaven Police Department and speak to the Lincoln County Board of Supervisors and the Brookhaven Board of Aldermen.

Roads and bridges were a hot topic.

Wicker stood at the podium facing the supervisors and asked about their bridges.

“How many have been closed,” he said.

Most had two or three out of commission. District 2 Supervisor Bobby Watts had 12. The list is continuing to grow with two more closed just this week following the last rounds of state inspections that were completed in December. Letters were sent to county and city boards just this week about bridges that were deemed by the state inspectors in four months ago.

Wicker said he expects Gov. Phil Bryant to call a special session in the next week or two to make some decisions that will bring more money to counties who need bridge repair.

“There’s a bond bill that has already passed and they’re going to tweak that so this bond money can be spent building county bridges,” he said.

Mississippi lawmakers agreed on a bond package of nearly $250 million to finance several projects, including $50 million to replace some local bridges.

“What we should do is be happy,” Wicker said.

Bryant and Louisiana Gov. John Bel Edwards are praising President Donald Trump’s proposal to put more federal money into infrastructure, but they say their rural states would be hard-pressed to pay a bigger share of the tab for projects paid by a combination of federal and state money.

The administration’s plan, released in February, proposes using $200 billion in federal money to leverage more than $1 trillion in local and state tax dollars to fix infrastructure, such as roads, highways, ports and airports.

“If we get on it, no county is going to lose their federal money and we ought to just see this as an opportunity to use this state bond bill to build county bridges. We ought to view that as a solution. I think we ought to view it as good news,” he said.

Wicker advised supervisors to meet with the Mississippi Association of Supervisors as well as Sen. Sally Doty, Rep. Becky Currie and Rep. Vince Mangold, all from Brookhaven, to bring them up to speed on the county’s needs concerning bridge repairs.

Currie, who was not at the meeting, said she expects the infrastructure bill will be passed soon.

“We will have to have a special session to come up with our match to get federal funds,” she said.

She explained that the House and the Senate were hard pressed to agree on an infrastructure bill.

“I though all along we needed to wait to see what the federal government was going to be able to help us with,” she said.

Wicker jumped from bridges to highways when he visited with aldermen.

“I have been very honest with people when I wasn’t optimistic about a bill moving forward and I’m not very optimistic about an infrastructure bill this year,” he said. “I view a 20-percent federal match as inadequate when you’re going to do a national highway bill. I think most members of the House and Senate don’t think that’s enough of a federal match. If you’re going to build highways and bridges you have to admit that they cost money.”

Mayor Joe Cox asked Wicker about news on the plans to turn Hwy. 84 into the Interstate 14 Corridor.

I-14 is a proposed federal highway that will stretch from West Texas to the eastern edge of Georgia. For Southwest Mississippi, that means Hwy. 84 could become an interstate.

If the White House rolls out the $1 trillion infrastructure bill as announced in February, the window for I-14 will widen.

“Great, great,” Cox agreed, waiting for the senator to give them something they could chew on.

Wicker finally tossed out a bone.

“We’re going to have to spend money to bring it up to interstate standards just like we did for Interstate 22 which was Hwy. 78, but it can be done,” he said.

It took 12 years from designation of Interstate 22 — which was Hwy. 78 — to completion for motorists on the  Memphis-to-Birmingham corridor.

“We would not have gotten the Toyota plant if we hadn’t stuck a sign up that said ‘Future Interstate 22.’ You don’t have to get done, but you have to show that you mean it,” he said.

Cox said it could take 12 to 15 years to get the corridor built.

While roads and bridges were the main subject, Wicker snuck in a few references to Brookhaven resident Cindy Hyde-Smith, the newest U.S. senator in Washington. Bryant appointed her in March to fill the seat of retiring U.S. Sen. Thad Cochran. She’ll be sworn in by Vice President Mike Pence Monday.

“I can’t tell you what it is going to mean to have a member of the appropriations committee be a hometown girl,” Wicker said. “She’s going to be great, I think, for the whole state, but there’s nothing like being able to talk to your United States senator in line at the grocery store or at church or wherever. I think you’re going to pleased.

“We’ve got to get over her November hurdle,” Cox said. “We have all the confidence in her. She’s such a hard worker.”