With a group of Brookhaven friends and family cheering her on, Republican Cindy Hyde-Smith made history Monday when she was sworn in as the first woman to represent Mississippi in the U.S. Senate.

Sen. Roger Wicker, her GOP colleague from Mississippi, escorted her to the front of the Senate chamber so Vice President Mike Pence could swear her into office in a ceremony televised on C-SPAN2.

The Brookhaven cattle farmer and former state commissioner of agriculture and commerce clutched a large, white family Bible in her left hand and raised her other hand as Pence performed the 30-second ceremony on the Senate floor of the U.S. Capitol.

“Please raise your right hand and repeat after me,” he said to a smiling Hyde-Smith.

“Do you solemnly swear that you will support and defend the Constitution of the United States against all enemies, foreign and domestic, that will bear true faith and allegiance to the same, that you take this obligation freely, without any mental reservation or purpose of evasion, and that you will well and faithfully discharge the duties of the office upon which you are about to enter, so help you God?”

Instead of repeating the oath, she said a simple, “I do” and made history.

Senators in the chamber applauded and some came forward to shake her hand, including Democratic leader Chuck Schumer.Senate Majority Leader Mitch McConnell, R-Kentucky, said immediately after the ceremony, which was held at the beginning of the Senate session, that Hyde-Smith brings a wealth of experience with her to Washington.

“I know I speak for all senators on both sides of the aisle in welcoming our new colleague,” he said. “We look forward to working together to continue this Congress’ record of accomplishment for the American people.”

In a twitter message, Hyde-Smith said she was “grateful and honored” as she started the day, “pretty historic in my life, for sure, and for the state of Mississippi.”

Hyde-Smith emerged as an unlikely choice to replace Cochran after Bryant declined suggestions from Trump and other GOP leaders to appoint himself. But in the 58-year-old who runs a family cattle ranch, the governor saw a history-making appointment of a Republican who had twice won statewide office and served 12 years in the state Senate, though she previously had been a Democrat before switching to the GOP in 2010.

Republican strategists are now warily watching the Mississippi race. Republicans should have a lock on the state Trump easily won, where Hyde-Smith co-chaired his Agriculture Policy Advisory Council during the election.

But she faces several challengers in the wide-open Nov. 6 special election to serve the remainder of Cochran’s term, through January 2021.

Among them is Republican Chris McDaniel, a tea-party conservative state senator who almost toppled Cochran in a primary four years ago, and Mike Espy, a Democrat who in 1986 became the first African-American since Reconstruction to win a congressional seat in Mississippi and in 1993 became President Bill Clinton’s first agriculture secretary. The Democratic mayor of Tupelo, Jason Shelton, is also running, and the deadline for candidates to file for the race is later this month.

There is no primary in Mississippi’s special election. If no candidate garners a majority, the top two vote-getters face off in a run-off later in November.

Hyde-Smith was accompanied at the ceremony by her husband, Michael Smith, and daughter, Anna-Michael Smith.

“It is a great honor to serve Mississippi as its first female United States senator,” she said in prepared statement released by her Washington office Monday afternoon.  “I am ready to hit the ground running, and I will do everything I can to represent the needs of all Mississippians. I’m excited to work with my colleagues to advance President Trump’s policies and advance the needs of our state and the nation.”

Several members of her family were in attendance as well as Bernie Reed, CEO of Reed’s Metals, and his girlfriend Brandi Seal. The entourage included Lincoln County engineer Ryan Holmes and Brookhaven attorney Joseph Durr.

Hyde-Smith is keeping most staff members who worked for Cochran, said Brad White, who will stay on as chief of staff. She will serve on the same committees as Cochran — Appropriations, Agriculture and Rules — but without leadership roles. Cochran had been chairman of the powerful Appropriations Committee.

White said Hyde-Smith will keep the three offices Cochran had in Mississippi, in Jackson, Oxford and Gulfport.

Though neither attended the ceremony, state Rep. Becky Currie and Sen. Sally Doty, both R-Brookhaven, weighed in on the proceedings.

“Cindy is a great example for all women and little girls,” said Currie, R-Brookhaven. “If you work hard you can achieve anything you want. I am so proud that Gov. Bryant and Mississippi has sent their first female to Washington. We need more women running for office for many reasons.”

Doty, who is campaigning for a U.S. Congress seat, sees Hyde-Smith’s achievement as groundbreaking.

“I think Cindy being appointed as U.S. senator leads us one step closer to a day when it’s not anything special to have a female senator or representative. It’s just an everyday, ordinary occurrence,” she said.

Hyde-Smith’s historic entry into the Senate comes on the heels of another first for the upper chamber: Illinois Democratic Sen. Tammy Duckworth became the first senator to give birth while in office when she delivered her second daughter, Maile Pearl Bowlsbey, on Monday. 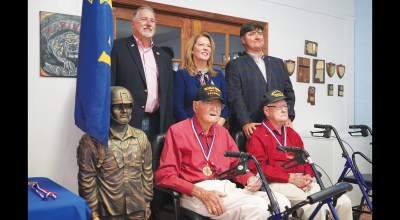