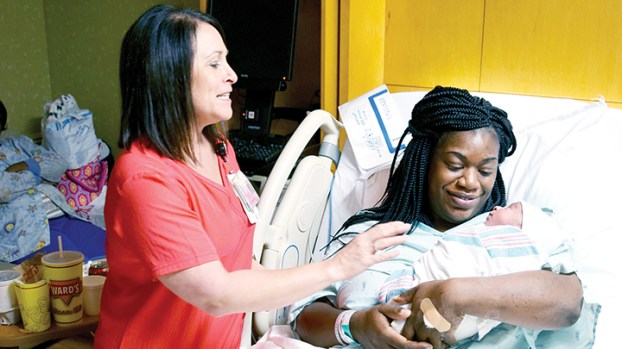 In two weeks, the hospital will power on a new security system for its labor, delivery, recovery and postpartum suites on the second and third floors as part of a major safety upgrade that will protect recovering mothers and their babies with technology and hard steel. Attempts to violate the system’s rules will result in a department lockdown, allowing mothers to rest easy knowing their new babies aren’t going anywhere, said LDRP Director Angie Williamson.

“There’s no way anyone could steal a baby now,” she said. “This is a state-of-the-art, gold standard security system.”

Williamson’s department will come under the protection of the latest version of the Cuddles Infant Protection System, a computerized monitoring system centered on elastic tracking bands placed around the arms or ankles of all new babies, which broadcast alarm signals if removed improperly, or if the baby is taken too close to any of the exits.

An alarm signal from one of the bracelets will lock down the exit doors and notify hospital security. The Cuddles system will also give LDRP nurses new monitoring stations to track babies’ locations. The bracelets have to be powered off and properly removed by nurses to stop them from broadcasting lockdown signals.

“Moms are keeping the babies in the rooms all the time now, and hard as we try, it’s very difficult to man the room security-wise all the time,” Williamson said. “If the Cuddles system alarms, it shuts everything down.”

Installation of the Cuddles system will help KDMC achieve status as a Baby-Friendly Hospital under Blue Cross Blue Shield of Mississippi’s Maternity Quality Model, a program that encourages family-centered care before and after delivery by discouraging elective deliveries prior to 39 weeks and encouraging skin-to-skin therapy and breastfeeding.

The designation is given through the Baby-Friendly Hospital Initiative, a global program sponsored by the World Health Organization and the United Nations Children’s Fund. The W.K. Kellogg Foundation is providing grant funding to help Mississippi hospitals achieve the designation.

Williamson said representatives from Boston Medical Center have been at KDMC this week to help the LDRP department prepare to meet Baby-Friendly Hospital requirements and implement the Cuddles system, which should be operational by the end of the month.

It wasn’t cheap — Cuddles cost more than $115,000, and it wasn’t in the hospital’s budget. The KDMC Foundation picked up the tab.

“One day at a management meeting I just raised my hand and said, ‘If you have a need you’re worried about the hospital being able to pay for, let me know,’” said KDMC Foundation Chairman Jeff Richardson. “Angie came to me afterward and told me about the Cuddles system. I said, ‘I think we can pay for that.’”

Richardson said the executive board supported the acquisition and the foundation was “off and running,” with some cash on-hand and the remainder raised through donations from foundation supporters and KDMC employees — the foundation’s largest contributing base. The money was there in around 30 days, he said.

“It really happened organically. It’s funny how the Lord works in this process — the need had just come up, and there we were with the money to help,” Richardson said. “I didn’t have to go knocking on doors.”

KDMC CEO Alvin Hoover said the LDRP department is an important part of the hospital from both a healthcare and a business standpoint. The hospital has made commitments to the department in the past, giving it a $2 million upgrade in 2010 as part of its three-year, $14 million expansion.

“The LDRP part of the healthcare business is something you’re always going to need,” Hoover said. “We deliver babies there, man — there’s hardly anything more exciting than a new baby coming into the world. We want those families coming in to have a great experience and, hopefully, they’ll remember that and think of us when they need more healthcare in the future.”