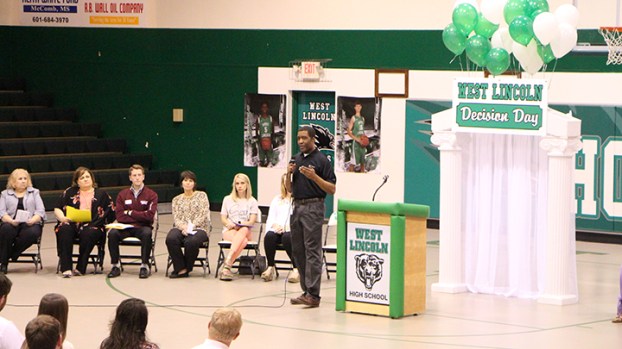 Seniors attended Decision Day 2018 on their campus recently and made a public declaration of their intentions after graduation in front of their parents and the high school student body.

“It’s similar to what an athletic signing day would be, but it’s for all of the seniors, not just the athletes,” Shows said.

The big decision has become a big deal at West Lincoln. Represeåçntatives from each senior’s choice for college, military or career are on hand to present that student with a certificate and acknowledge the choice.

Shows said he started the program when he came to the school last year to encourage students to think about their choices following graduation. This year students from the freshman, sophomore and junior classes watched the ceremony.

He said it’s particularly important for the ninth-graders to attend because this is a pivotal time in their education.

“Most high school students take more classes their ninth-grade year than the others,” he said.

He reminds them their next few years in high school will be a blur and soon they’ll be the ones making the public decision on the gym floor.

“I told them, ‘It goes by so fast. You’re going to be there before you know it,’” he said.

It’s also good for the juniors to be a witness because they’ll be in those seats next year.

“They need to start thinking, ‘Where are you going to go? What college is your major going to be at?,’” he said. “There are all kinds of questions to ask yourself. Those are the questions to ask now as a junior.”

Shows said by hosting the Decision Day program, it not only gets freshmen, sophomores and juniors thinking about their pathways, but also the seniors who may still be undecided. At the beginning of the school year, they put all the seniors’ names on a West Lincoln logo in the hallway with the question, “Which pathway will you choose?”

“It has all their names on the wall,” he said.

Then they added banners for colleges.

“Decision Day, it puts some good pressure on some seniors to make a decision,” he said. “It’s good to do it before school is out, to get applications done. It gets the ball rolling and finalizes their decision.”

At the event, the West Lincoln fourth graders sang “Fight Song,” and former graduate Patrick Brown, technology director at Mississippi School of the Arts, gave an inspirational message to the seniors.