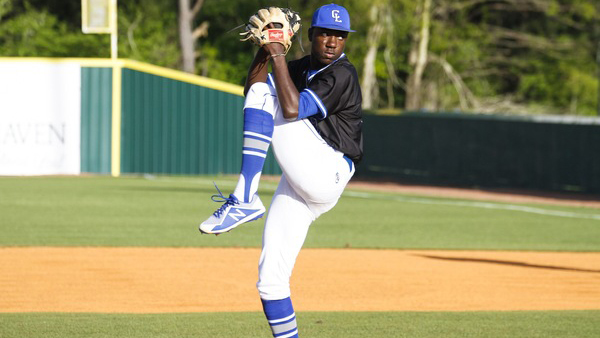 Photo by Co-Lin Sports Information/Wolves sophomore Christian Day pitched in the first game of the day against the Northeast Tigers, and was credited with the loss.

Wolves bounce back in Game 2 to split with Tigers

The Wolves of Copiah-Lincoln split with Northeast Community College this past weekend to move to 15-10 overall on and 4-8 in MACJC play. The Wolves were at Sullivan Field Tuesday to take on No. 12 JCJC.

The Wolves gave up several runs early and were unable to recover in game one as the Tigers ran away with the victory.

The Wolves got one back in the bottom of the second when Ryan Zimmerman crossed the plate after an error, but Northeast continued to score with a two-run homer in the top of the third and an RBI double in the top of the fourth.

One bright spot for the Wolves was an RBI double from Austin Tidwell in the bottom of the fourth. The shot scored CJ Estave. Co-Lin’s Jaylyn Williams also score during the at bat after stealing home.

The Tigers pushed two more across in the top of the fifth on an error and a fielder’s choice to secure the 14-3 run-rule victory.

Caleb Griffin led the Northeast to victory on the mound. He surrendered three runs on two hits over four and two-thirds innings, striking out one and walking one.

Christian Day took the loss for the Wolves on the rubber after he lasted one and one-third innings, allowing eight hits and eight runs while striking out one and walking one.

The nightcap was much more favorable for the Wolves as Co-Lin racked up 12 runs on 10 hits.

Co-Lin struck first in the bottom of the second. CJ Estave and Austin Tidwell reached base on back-to-back singles, and Estave scored later on an error to give the Wolves the early lead. Mark Hubbard drove Tidwell home with a sacrifice fly to stretch the lead to 2-0, and an RBI single from Thomas Slagle scored Zach Pope who reached base after being hit by a pitch.

Estave drove in Austin O’Flynn in bottom of the third with a line drive to left to grow the Wolves lead to 4-0, but Northeast plated two in the top of the fourth with a pair of RBI singles cutting the lead back down to 4-2.

Co-Lin broke the game open in the bottom of the fifth with two RBI singles from O’Flynn and Zimmerman, and an error that plated O’Flynn, and Jaylyn Williams. The Wolves led 9-2 going into the sixth.

Northeast fought back and got two in the sixth, but the Wolves once again took advantages of walks and errors and added three more in the bottom half.

Parker Lee was credited with the victory for Co-Lin. He went three and two-thirds innings, allowing two runs on five hits, striking out four and walking one. Anthony Clapp, Tyler Etheridge, and Zach Smith all put in work on the mound in relief out of the bullpen, steering the Wolves towards the victory.

Tanner Smith took the loss for the Tigers. He went four innings, allowing eight runs on six hits and striking out two.

Estave, Slagle and O’Flynn each managed multiple hits for the Wolves. Estave went 3-for-4 at the plate to lead Co-Lin at the plate.

Loyd Star erased a 3-0 lead on Saturday to knock off Franklin County 8-4. “We started off slow, but then... read more