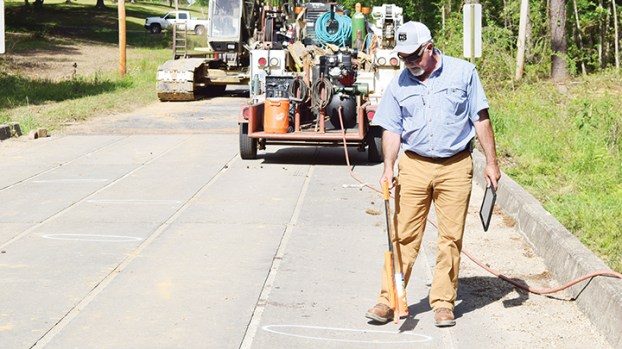 Photo by Adam Northam/Randy Emfinger, an engineer with Lincoln County’s Dungan Engineering, marks off cracks in the concrete deck of a bridge on West Lincoln Road Wednesday afternoon. The short span over Butler Creek is one of almost 50 bridges supervisors have targeted for repair or replacement since the federal government ordered third-party inspections beginning in 2016.

Four Lincoln County bridges targeted for closure as part of Gov. Phil Bryant’s surprise order Tuesday afternoon were already shut down, and supervisors are in the early stages of planning for their repair.

Lincoln County Engineer Ryan Holmes of Dungan Engineering, said supervisors closed bridges on Fair River, Flint Trail and Summer’s Lane, as well as the county-owned bridge on Williams Street in Brookhaven April 4, after receiving notice the structures had failed safety standards in the previous round of federally-ordered statewide bridge inspections. Supervisors complied with the 24-hour law after getting the heads-up Tuesday and had the bridges posted and graveled the next day.

“Lincoln County is in compliance,” Holmes said. “We’re already working on plans to repair or replace them, trying to get some quotes. We’ll have to find a way to fix them.”

The USDOT has come down hard on Mississippi over the last 18 months, ordering the Mississippi Office of State Aid Road Construction to issue a $31 million contract to five out-of-state engineering firms to inspect hundreds of timber bridges statewide. Inspectors have found scores of failing bridges and closure orders have been passed down continually, and in bulk, since the project began.

The inspections have set off high drama in the usually-boring world of transportation engineering, with counties and their contracted engineers kicking sand over implications they aren’t taking safety seriously and complaining loudly about the high cost of outside inspections — money they say would have been better spent on increased funding for road and bridge projects.

The uproar made it all the way to the Legislature this year, where much political effort was expended toward the development of a longterm funding solution for roads and bridges. Those efforts failed with the death of Lt. Gov. Tate Reeves’ billion-dollar BRIDGE Act, and lawmakers ended the session with no answers — though Republicans are hinting Bryant may call a special sessions to deal with transportation funding after he had to order the closures this week.

In the meantime, counties are suffering — especially Lincoln County, which ranks second in the state in number of bridges with 303, about one-third of which have timber substructures, though that number is slowly decreasing as supervisors knock down condemned timber bridges and replace them.

Since inspections began in 2016, 45 bridges in Lincoln County have been affected. Supervisors have struggled to stay ahead of the closures, filling their project backlog with State Aid and borrowing $5 million to fix as many smaller, locally-owned bridges as possible. The county has already repaired seven bridges in 2018 so far, with another seven either under construction or under contract.

Holmes said the four most recent bridges ordered closed were inspected in December and January, but supervisors didn’t get notice until last week — eight weeks later.

“It definitely was a surprise. I don’t know why there was a delay in letting us know, but when they let us know we closed them,” he said. “These inspections have caught everybody off-guard. The hardest thing is when you have a sudden change, whatever it may be, it’s hard to be prepared for that.”

Preparation was nearly impossible for District 2 Supervisor Bobby Watts. Last week’s closure of the bridge on Fair River Drive was the 13th bridge closed in his district since federal inspections began. The good news for Watts is there aren’t many timber bridges remaining in District 2.

District 4 Supervisor Eddie Brown said state funds for roads and bridges are not enough to meet demand. He said counties need a permanent funding solution to allow for long-range planning — although lawmakers dropped $50 million into the Local System Bridge Replacement and Rehabilitation Program this year, there is no guarantee it will be funded next year.

“They didn’t give us an LSBP money last year, this year they’re giving it to us, but next year they’re liable to not do it again,” Brown said. “You can’t draw up blueprints and have plans ready to go like that.”

Another round of federal inspections is scheduled for later this year.

Brookhaven police are offering information at a Neighborhood Watch start-up meeting today for residents who want to make their community... read more