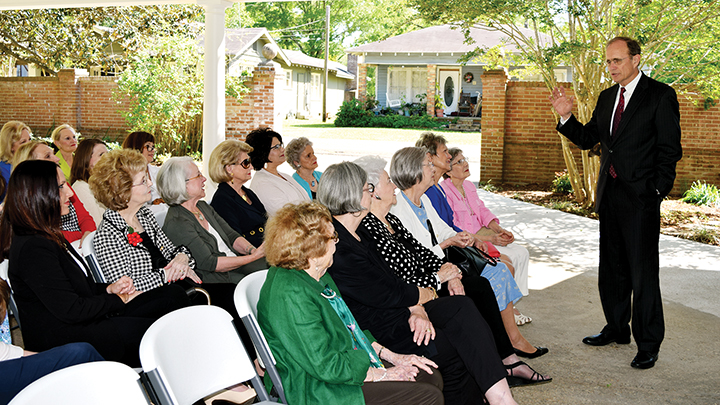 Photo by Adam Northam/Mississippi Secretary of State Delbert Hosemann addresses the Climbers Club of Brookhaven Thursday afternoon at Betty Dixon’s home on South Jackson Street. Hosemann gave a presentation on his office’s workforce development efforts and opined on state politics for 2018 and 2019.

Delbert Hosemann isn’t sure what his next political move will be, but he knows he’s going to make one.

The secretary of state told a group of around 50 ladies at a meeting of the Climbers Club of Brookhaven Thursday afternoon his name would appear somewhere on the ballot in next year’s statewide elections, and it wouldn’t be for a fourth term as secretary. He said it was time for someone else to take over that job.

“But neither Lynn (his wife) nor I think it’s time for me to go home,” Hosemann said. “You’ll probably see me on the ballot at another time.”

Hosemann was elected secretary of state in 2007, and won the job again with ease in 2011 and 2015. He has hinted at further political ambitions since 2016, and it was rumored Gov. Phil Bryant considered appointing him to the U.S. Senate to take over for the retiring Thad Cochran before settling on Brookhaven’s Cindy Hyde-Smith, who was sworn in Monday.

The Clarion-Ledger reported in early March it overhead Hosemann admit his eye was on the job of lieutenant governor, but as he pounded punch and strawberry cake at the Climbers Club reception Thursday, the secretary was unwilling to name that or any other office.

“Nobody’s talking about that yet,” he said. “We need to get our senators and our congressmen working first.”

Hyde-Smith’s service got off to a shaky start when word got out President Donald Trump would not support her against Republican state Sen. Chris McDaniel, a Tea Party candidate, while Doty is up against well-liked and well-funded officials from the Jackson area.

Like most establishment Republicans, Hosemann is a Hyde-Smith man. He praised Doty, too, though he stopped well short of endorsing her.

“When people see Cindy Hyde-Smith casting her ballots, they will feel much more comfortable. She will get stronger and stronger,” he said. “Sen. Doty has been wonderful. She was a tremendous asset to our office in election reform from her seat on the Senate Election Committee. That’s another (race) where you’ll see some kind of runoff. You just have a lot of good candidates running.”

Hosemann made the stop in Brookhaven on a day-long tour promoting his office’s Y’all Business initiative, emphasizing work his office is doing to bring industry, community colleges and high schools closer together for the development of workforce-ready curriculum.

He said only half the jobs in Mississippi are attainable with a high school-only education, and he expects that number to fall as low as 30 percent over the next decade. He said half the approximately 2,000 businesses his office surveyed as part of the Y’all Business initiative responded they would expand immediately if they had the right number of highly-trained employees.

“If they can’t find an educated workforce, they either don’t hire, don’t expand and don’t pay more taxes, or they leave,” Hosemann reported.

The secretary said his survey showed an educated workforce and community support were the top two concerns of 55 percent of businesses polled, while tax relief ranked No. 11 — way down at the bottom — on the list.

“We put it in our minds that it’s No. 1, that we have to give away a lot to get a business here. We don’t have to do that,” Hosemann said. “We’ve got to get the community colleges and industries to invest in 10th, 11th and 12th grade. We have to start that technical education training earlier. Students are building robots these days — every student who can build a robot is gonna get a job. Not every young man who can shoot a three-pointer is going to the NBA.”

Hosemann also told the Climbers Club his office will hold a press conference next week on military voting rights under the Mississippi Uniformed and Overseas Citizens Absentee Voter Act, and will be sending business cards to the Mississippi National Guard soldiers training at Fort Bliss, Texas, with election dates and absentee voting instructions.