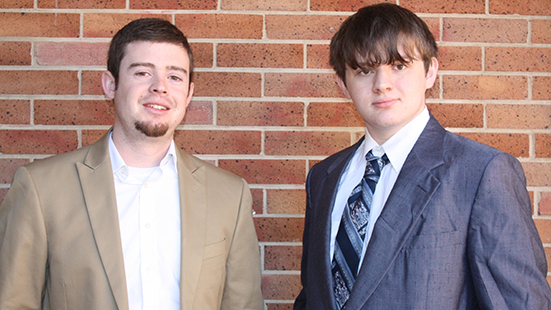 A Bogue Chitto senior picked Chase Wallace as his STAR Teacher because he “gets down to the nitty gritty” of history with his students.

Senior Seanlee Matthews is Bogue Chitto’s STAR Student. The 18-year-old son of Tracey Quin, of Bogue Chitto, scored a 30 on his ACT after three tries.

“I scored a 29 the first two times so I got aggravated and took it a third time,” he said.

Matthews plans to study computer science courses at Copiah-Lincoln Community College. He hasn’t decided if he’ll finish at Mississippi State University or Mississippi College. It depends on which will fit his degree better. He’d also like to pursue a master’s.

Though he enjoys history and Wallace’s class, computers are his main interest. He’s goal is to be a computer technician or software developer. Matthews enjoys role-playing, turn-base tactical games.

“I like history, but I don’t feel like I would do good as a historian,” he said. “I’m a real big gamer nerd. If you put a game in front of me, I can sit down and figure it out in a day or two.”

Matthews said he enjoyed Wallace’s class because he made learning history fun.

“I was easily able to retain everything he taught. He got down to the nitty gritty of it with us and let us have conversations about what we were learning,” he said. “He put it in a language that we could understand better.”

He also enjoyed making puns and no subject escaped his keen wit as he joked about everything from politics to World War II.

“If I if see an opportunity for a joke I make a joke,” he said.

Wallace teaches U.S. history to juniors and government and economics to sophomores and seniors. He’s had Matthews in his class all three year years he’s taught at his alma mater.

He was surprised that Matthews chose him.

“He’d given me a notice that I’d made it as his final two,” he said.

He said Wallace was “very bright” and enjoys that the teenager can make him laugh with his history jokes.

Four Mississippi State University students are accused of breaking into the University of Alabama’s athletic facility and stealing memorabilia. The... read more