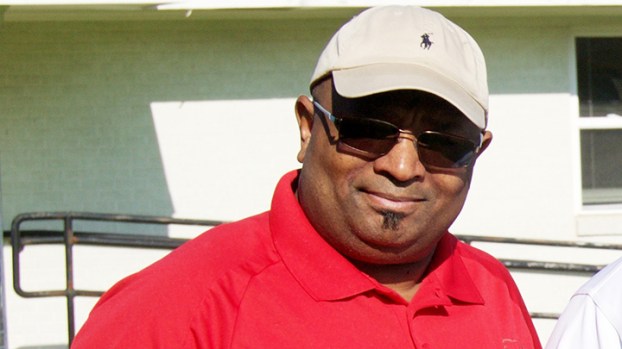 Johnson wasn’t even in school yet, just a little boy, and Roberson was a towering man, way up over 6 foot and in the 200s. He was the first black cop to patrol the streets of Brookhaven, and Johnson and the other kids on the block looked up to him. They gathered around him when he stopped his car and got out to check on all the families in the neighborhood and walk his beat.

“I always harassed him about giving me his police cap,” Johnson remembered. “One day, out of the blue, he stopped and he beckoned me over to his patrol car, and guess what — he gave me his police cap. From that day on, I was hooked.”

“I begged him, for one thing,” Johnson said. “Even as a kid, being a police officer is something I’ve always been inspired to do. I told him the story about Irvin Roberson.”

It worked. Johnson got the job, and he’s been on the force in Brookhaven for 24 years and with the Brookhaven School District as a resource officer for 22 years. Those more than two decades of service will come to an end on May 6, when Johnson, 50, officially retires.

“My philosophy as a policeman was just to take things you encounter one at a time, and treat people as you would want to be treated,” Johnson said. “I lived by that code, and I worked by that code.”

Johnson said former Police Chief Pap Henderson was a mentor to him and other young officers in BPD, and the chief taught him how to use his badge to become a support system for the community. He said former Chief Bobby Bell taught him even more lessons in 2013 when he promoted him to captain.

“For him to have enough confidence in me to put me in that position when he had a whole department of officers to choose from, that meant a lot to me,” Johnson said.

Johnson said being captain gave him a new perspective on policing in the waning years of his career, a new appreciation for the responsibility of the job.

Johnson’s advice to young cops just getting started is to find pleasure in the work, even the bad work that’s sometimes part of the job.

“Being a law enforcement officer, very seldom do you get a pat on the back from the public, but there’s a feeling of accomplishment when you’re able to help somebody,” he said. “You have to self-praise, and we do a good job of encouraging each other.”

Johnson wasn’t ready to retire — he doesn’t turn 51 until July — but malfunctioning kidneys have forced him to call it quits too early. He found out he had kidney failure in February, and now he’s burning through his accumulated sick time before the final papers are pushed out May 6. He’s hoping to make it onto a transplant list soon.

In the meantime, he’s enjoying peaceful days with his wife, Yolanda, a teacher at Mamie Martin Elementary School, and his 8-year-old daughter Eleanor. His policing days are over, but he still makes himself available.

“Some of the guys still look to me for mentorship, so I still talk to quite a few of them on a regular basis, and I leave myself open if they need somebody to talk to,” Johnson said. “I’ve had a fulfilling career. I’m satisfied I did everything I could possibly do.”

Bell said he worked with Johnson from sergeant up to chief, and he was always there when he needed him.

“He has the attitude it takes to be a police officer — he knows how to get along with people, and he has a good temperament, just mild. He could calm the maddest person down,” the former chief said. “He’s a mighty fine family man and one heck of a police officer. I hate to see him getting out of law enforcement.”

“He knows all our kids, knows all their mommas and daddies at this point. He’s been a wonderful asset to the school and a great liaison between us and the police department. He will truly be missed.”

Workforce development is critical. Science and mathematics are the skills of tomorrow. The nation requires more tradesmen. That’s all true.... read more