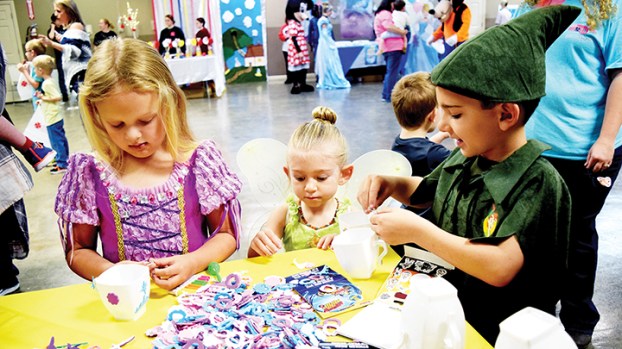 Photo by Adam Northam/Pictured are, from left, 6-year-old Zoey Freeman, 4-year-old Macie Deer and 7-year-old Eli Deer playing at an arts and crafts table at last month’s Donuts and Juice with Disney fundraiser for the KDMC Relay for Life team.

Survivors, family members and anyone else who wants to walk all over cancer will get a chance to do it Friday night at the Relay for Life of Copiah-Lincoln at Exchange Club Park in Brookhaven.

Opening ceremonies begin at 7 p.m., and survivors and caregivers will have the honor of putting the first feet on the course for a special walk in their honor at 7:15 p.m. Entertainment by the Bridge Band begins at 8 p.m., and the candles of the moving luminaria ceremony will light up at 9 p.m., with each soft glow representing a life that has fought — whether lost, won or still battling — against cancer. Awards and closing ceremonies end the event at 11 p.m.

“We kick off the event by honoring everyone who’s been affected by cancer and everyone who has contributed to the success for this year’s Relay season,” said Cindy Ashmore, senior community development manager for the American Cancer Society. “We honor their strength and courage with every step they take. It doesn’t matter if you were diagnosed 10 days ago or 10 years ago, you can walk while everyone gathers together to cheer you on.”

The Brookhaven Exchange Club will open its midway for the event, and armbands for unlimited rides will be sold for $10 each. A survivor supper hosted by Lincoln County Farm Bureau will precede the Relay at 6 p.m.

Last year was the first time the Relays of Copiah and Lincoln counties were combined, and the initial run was a success, raising more than $53,000 and honoring more than 50 survivors. This year’s fundraising goal is $59,000.

Participants are three-quarters of the way there. So far, teams and individuals have raised almost $42,000 for cancer research, but there’s a long way to go to the goal.

So far, a team from the Brookhaven Walmart is leading the way with $13,004 raised. Private team Prayer Warriors is second with $7,448, and King’s Daughters Medical Center is third with $3,348. Other teams contributing include the Walmart Distribution Center, Haven Hall Healthcare Center, Team Silver Cross, Centerpoint Energy, the Hazlehurst Walmart, State Bank and Lifestyle Enrichment.

Not all funds have been reported. This year’s totals will climb when the final tally is made Friday night.

This year’s Relay should take place under clear, cool skies. The Friday night forecast calls for mostly clear skies with a low of 49 degrees and little chance of rain.

Not everyone living in the areas of Brookhaven affected by the Annexation Improvements Project will get full services from the... read more