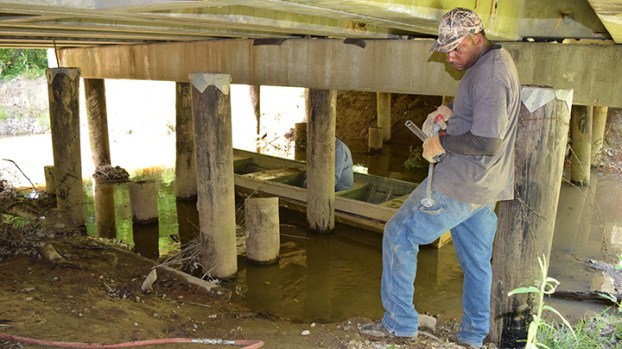 Oddee Smith and Sons Inc. crewman James Barnes works underneath a bridge on West Lincoln Road, using a wrench and an impact to yank out bridge fasteners.

Lincoln County has spent more than $3 million ripping out and replacing bad bridges since last summer, racing to keep abreast with federal bridge inspectors who are closing hundreds of spans statewide.

County engineer Ryan Holmes, principal of Dungan Engineering, provided records showing supervisors have repaired or replaced, bid out for contract or begun planning for the replacement of 37 bridges since July 2017, with another 30 or so bridges on the longterm list. The county has spent $3,191,227 on 31 of the bridges, with costs still being determined on the remaining six.

“It’s pretty impressive that 37 bridges have been repaired, replaced or under construction or contract within the last nine months,” Holmes said.

Lincoln County is a key battleground in what has become Mississippi’s biggest infrastructure crisis after the U.S. Department of Transportation last year ordered the state to award a $31 million contract to out-of-state engineering firms for independent bridge inspections.

The inspections have resulted in the closure of around 650 rural bridges statewide and led to political turmoil at the highest levels. Boards of supervisors are in an uproar over decreased funding and suggestions they’re to blame, and the Legislature tried and failed to pass a longterm funding solution this year.

Gov. Phil Bryant issued an emergency order for further closures earlier this month after the USDOT threatened to pull federal highway funding from the state if the bridges weren’t shut down immediately.

The unexpected closures have hit county transportation networks hard, and only a handful have been hit harder than Lincoln County’s — the county ranks second in the state in number of bridges with timber substructures at 108, and ranks third in number of total bridges with 306. Hinds County leads the state in both categories.

Lincoln County supervisors took out a $5 million loan earlier this year to keep pace with the closures and have been steadily putting the money to work. Of the more than $3.1 million spent so far, only $908,000 has come from state funding, with the remaining $2.28 million coming directly from the county. No federal funds have been expended.

The list currently stands at 17 completed bridges, seven closed or partially closed, seven under contract and awaiting construction, and six under construction.

Seven bridges remain closed or partially closed in the design phase, with little information on cost estimates or completion time.

A contract has not yet been awarded for Cotton Lane Northeast, where right-of-way acquisition is ongoing and approximately $273,000 of construction expected to begin in early fall this year. One lane of the bridge on Herbert Trail Southeast is closed, where the design phase is ongoing and no cost estimate has been established. The Maple Lane Southwest bridge is closed and will remain so for the foreseeable future.

One bridge on Pioneer Lane Northwest has a lane closure and is in the design process, while supervisors are accepting bids on another span on the same road. A temporary closure is in place on Summers Lane Southeast, and design has begun on a replacement for the bridge on Williams Street in Brookhaven.

Federal bridge inspectors are expected to return to Lincoln County late this summer or early fall and begin a second round of inspections expected to produce more closures.

Q: What is the latest on the city’s animal shelter? A: City engineer Mike McKenzie, a principal with WGK Inc.,... read more