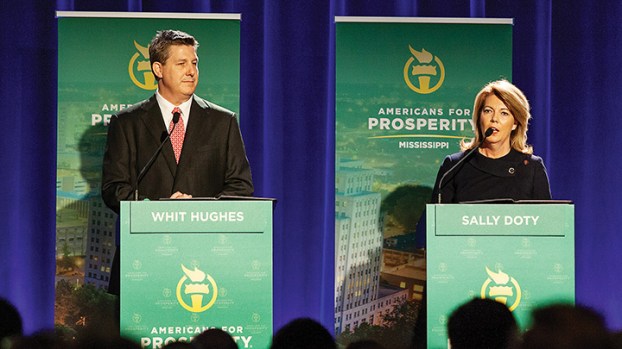 Photo by Amile Wilson/Sen. Sally Doty addresses a topic posed to the panel of Republicans involved in the congressional debate Wednesday night in Jackson.

Doty used the two-hour debate among the six Republican candidates running for the 3rd Congressional District to set herself apart as the only competitor with law-making experience, showcasing her inside knowledge of government and previous success in writing and passing legislation. Her answers to the pointed questions from moderators seldom matched the intensity and idealism of her opponents, but the straight talk went far to establish her as a knowledgeable, capable contender.

“We’ve heard a lot of lofty ideas tonight. I guess I’m much more of a realist,” Doty said in her closing statement. “If you do not get your legislation passed, the voters of the 3rd District are left out. My experience is invaluable in that regard.”

The debate, sponsored by the Mississippi chapter of conservative advocacy group Americans for Prosperity, featured all six Republican candidates running to take over for U.S. Rep. Gregg Harper, who will not seek reelection in the June 5 primary after a decade in office.

Democratic contenders Kevin Michael Aycox and Michael Evans, along with Reform Party candidate Matthew Holland, were not invited to the event.

Doty has been an underdog since the race began, with her humble home area of Southwest Mississippi unable to match the 3rd Congressional District’s political and financial center in the Jackson area, where Guest and Hughes are perceived to have the advantage. The three men in the race definitely have control in the fundraising arena, with Parker reporting total receipts of $342,042, Hughes reporting $304,354 and Guest sporting $280,911.

But the money couldn’t talk at Wednesday night’s debate, and Doty took advantage.

Parker got off to a rough start in his opening statement, stammering through his two-minute first impression and awkwardly praising his own intellect. He would spend much of his time on the microphone touting economic development for Mississippi, saying he would use the office in Congress as a channel to bring industries to Mississippi, though he never really explained how.

Hughes came out referring to his glory days on the court for the Mississippi State University basketball team, unveiling “Whit’s Game Plan” for Congress. The phrase “game plan” would come back again and again throughout the night whenever Hughes had the floor, as though he had been coached a little too hard on what to say during the debate.

Parker recovered in the long run, and along with Guest may have had the second-best showings behind Doty. Guest in particular set himself up as the only other candidate that has done real work in a public service capacity. The popular prosecutor took every chance he had to remind the audience his office had taken on 20,000 felony cases.

“That has given me an understanding of a wide variety of issues,” he said.

The other two women in the debate had the poorest showings. Dunn, the hospital expert, used every question to hammer on Obamacare, which did little to set her apart from the field, as all six candidates used every opportunity to trash the Affordable Care Act and generally slide as close to President Donald Trump as they dared.

Some of Tate’s responses were downright ridiculous. She answered the first question, which dealt with federal spending, by saying cuts to Medicaid and assistance programs would liberate the poor and lead to a “renaissance.” In a later question about healthcare costs, she seemed to advocate for giving hospitals the right to refuse patients, referring to her own visit to the emergency room with a gunshot wound.

“I don’t know if they have to treat everyone that comes in. I’m not complaining. I lived,” she said.

Tate would later set the audience to whispering when she advocated for medical cannabis for nursing homes, a bold and progressive suggestion gaining support in other parts of the country, but the wrong thing to say to Mississippi conservatives.

“I’m only half joking,” she said as the grunting grew louder.

None of Doty’s comments fell so flat, though the five other candidates each took turns clobbering her for being a politician. Doty is a career attorney and has served in the Mississippi Senate six years, and each candidate tried to suck up some of the Trump era anti-establishment energy by labeling Doty as a political villain.

Dunn said, “President Trump does not need another lawyer, another politician,” while Hughes claimed to understand economic development better than any other candidate. Doty hit back with what may have been her strongest statement of the night.

“This is a job as a legislator. It’s not a job as an economic developer,” she said. “The communities know what they need — they need a legislator who can get it done here for them. Mississippi has a strong history of sending a representative with a strong legislative background. There’s a learning curve, and I’ve had that learning curve.”

Parker’s response to that statement was the only time during the debate another candidate was really able to smack down Doty.

“We’ve been sending legislators to Washington for 50 years, and we’re 50th,” he said. “Let’s not lose sight of that. We have to do something different.”

In the debate’s specific policy questions, Doty was strong, winning outright in the best cases and avoiding the face plants that plagued other candidates in the least.

While the other five candidates preached old sermons about curbing federal spending, she was the only one to provide any kind of specific insight to the night’s first question about decreasing Mississippi’s dependence on federal spending, saying the Trump tax cuts would grow the economy and lead to great financial independence — though she stumbled a bit at the end with some weird comments about dignity for the unemployed, it was no worse than the other non-answers.

Moderators later asked for specific ideas to reduce healthcare costs. This was the question that led Tate to tell her gunshot story, and Dunn once more trashed Obamacare. Guest also went wrong here, arguing that costs would settle if the nation repealed Obamacare and returned to the old system — as part of the question, moderators clearly pointed out healthcare costs were rising sharply before Obamacare. Hughes was onto something with a statement about funding healthcare providers based on outcomes rather than volume, but then he detoured to talk about broadband Internet access for rural areas.

Parker and Doty provided the best specifics — Parker demanded price transparency from healthcare providers and allowing insurance companies to deal across state lines, and Doty backed him up and called for more preventative healthcare.

“We have to talk more about personal responsibility. Fifty percent of health indicators are because of choices you make,” she said.

It wasn’t popular, but Doty also scored the only points when candidates were asked about supporting right-to-try legislation, which would allow terminally ill patients to take experimental medicines not yet approved by the Food and Drug Administration.

All the candidates supported right-to-try — this was when Tate appropriately supported medical cannabis, even though it cost her — but only Doty drilled down into the issue, pointing out coverage of expensive, experimental therapies would drive up premium costs for private insurance and burden taxpayers for public insurance.

“Sometimes we have these unintended consequences. Understand a patient who chooses to exercise that right would have to be a private-pay patient,” she said.

Another question about Trump’s tariffs was mixed for Doty. She and most other candidates faced the tricky task of sticking close to Trump while backtracking from his trade wars, which may end up hurting Mississippi farmers. Guest put conditions on his support for tariffs, while Hughes and Parker plainly opposed them. Tate and Dunn backed up Trump’s trade wars, and Doty scratched out a middle ground.

“The actions the president has taken are focused on China, a communist country that is a bad actor,” she said. “Power regarding tariffs is really reserved to the Congress. If Congress has the will to do it, it could take a vote as to whether that’s an appropriate use of his power.”

Doty said she would not vote for Trump’s tariffs if she were in Congress now, calling it “a fluid situation.”