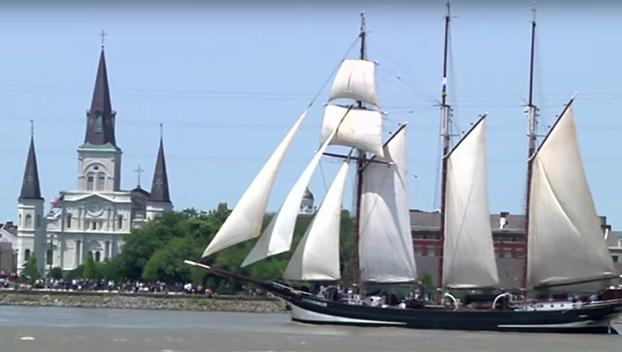 The billowing sails of one ship could be seen as it approached from a distance. But the vessels had sails furled as they rounded a sharp bend in the river and approached under engine power, aided at times by tugboats. Similar vessels docked earlier on Lake Pontchartrain, the 630-square-mile water body on the north side of the metro area.

One of the tall ships visiting Thursday, the Elissa, is a restored vessel built in Scotland in 1877, according to event organizers. Others were built more recently but some look like throwbacks to ships that might have plied the lower Mississippi and Gulf of Mexico centuries ago.
“We don’t see ships like that anymore,” New Orleans resident Anna Thomas said as she watched the ships on the river. “All we see are metal, gray and ugly, bulky things. These are actually crafted. They’re beautiful.”

The tall ships, along with more modern Navy ships from the United States, Canada and France, are in New Orleans for the annual Navy Week celebration, as well as the tri-centennial. Tours of the ships begin today and continue through Sunday.

Scattered events marking the city’s founding in the spring of 1718 have been going on for months, including historical exhibits on topics as diverse as Catholicism in the city, the roles played in the city’s development by generations of women and the work of various artists.

The tall ships’ arrival gives the commemoration a higher profile and central focus. And it comes ahead of other events including Saturday’s “International Welcome Ceremony” at Jackson Square in the French Quarter. The city bills it as an event welcoming dignitaries from other nations that have contributed to New Orleans’ history and culture.

On Sunday, at Louis Armstrong Park just outside the French Quarter, the city holds a “citywide family reunion.” Jazz musicians there — including local favorites Terrence Blanchard, Kermit Ruffins and Ledisi — will take part in shooting a video celebrating International Jazz Day, which is April 30.
The 300th anniversary is the backdrop for a series of discussions Friday, moderated by editors of the news website Axios, on issues facing modern cities, including climate change, poverty and security. And the city, a destination for international tourism, has scheduled a media “sneak peek” at the new terminal for the Louis Armstrong International Airport next Wednesday.

Tuition at Mississippi universities to increase 4 percent, on average