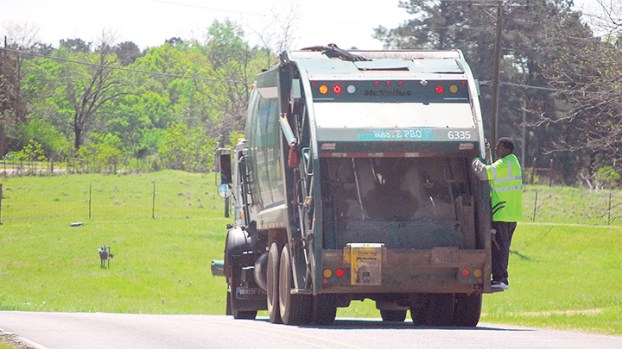 The next company collecting garbage in Lincoln County will face fines for missed pickups, make regular appearances before the board of supervisors and probably include garbage cans as part of its contract.

Supervisors Monday told six regional garbage companies planning to bid on the contract they would charge the next collector three times their own costs if county crews have to go out for missed pickups, a contract stipulation that really has no math behind it but drives home the level of service the county expects. The board also said it would ask for reliable contact information and call company managers into board meetings regularly to ensure problems with trash collection are identified and corrected quickly.

“We want you to come before the board three or four times a year. We ought to be able to talk — if we can’t have that, this is just a waste of time,” said District 1 Supervisor and board president Jerry Wilson. “Early detection is better than anything. When there’s a breakdown in communication, there’s going to be a divorce. Somebody’s going to leave.”

The county contract has two options — weekly trash pickup, and weekly trash pickup with 96-gallon garbage cans provided to the 9,119 active waste accounts. Bids can be submitted for either way, but it seems unlikely companies will skip the second option after supervisors made it clear they preferred cans as part of the deal.

After several questions about ownership of the cans, supervisors made it clear residents would own the cans and be responsible for their repair or replacement.

“Unless y’all’s truck runs over it and tears it up,” said county administrator David Fields. “Then we’d expect y’all to replace it.”

Supervisors will maintain a 7 a.m. start time for all garbage routes, and the contractor will be required to publicly announce earlier pickup times in advance. Exceptions to the start time may be made for closed bridges.

“It’s going to be a factor,” said county engineer Ryan Holmes. “We have a lot of posted bridges, and I think that cycle will continue. About 50 more bridges will be inspected this fall, so I expect some more closures. In most cases there are alternate routes, and we try to let contractors know when there’s a closure or a posting.”

Holmes said bridges currently closed should be repaired and reopened by the time the new trash contract takes effect Oct. 1.

District 4 Supervisor Eddie Brown told all six companies to structure their routes to stay clear of school zones during the start and end of the school day.

“We don’t need garbage trucks around the school buses or the mommas and their kids,” he said. “We’ve had that problem with West Lincoln and Brookhaven Academy. When you make your routes up, let’s schedule around where we’re not in there at school time.”

The new contract will not specify a limit to the amount trucks will pick up, but garbage must be bagged and no furniture, white goods or non-bagged garbage will be collected.

The contract will be awarded for three years, with an option for a three-year extension. It will allow for annual price increases in accordance with the consumer price index.

Even after bids are opened and the contract awarded, some price negotiation will take place based on the City of Brookhaven’s choice for collection services that same day. Rates could come down if the city and county choose the same company for pickup, or if the city chooses the county’s contractor for operation of the trash transfer station.

With three contracts up for bid, it’s possible three different garbage companies could be operating in Lincoln County this fall.

Brookhaven police are searching for a pair of thieves after receiving several reports and video evidence of break-ins in the... read more