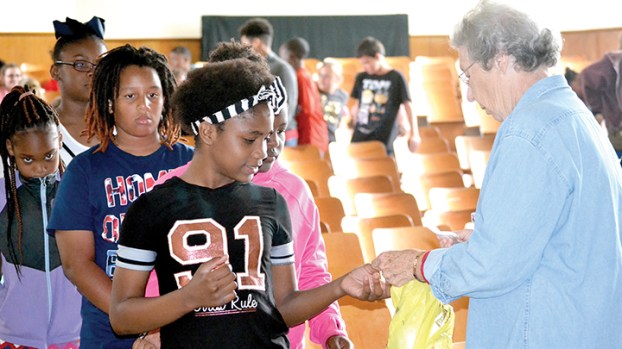 The Lincoln County Master Gardeners are sowing seeds hoping to grow an interest in horticulture.

Volunteer Sara Gamblin poked tiny white Congo watermelon seeds in hundreds of clear plastic zippered bags no bigger than a Tic Tac box and slapped an instruction sticker on each. Each bag holds around 15-19 seeds — enough to see a few watermelon sprouts pop up a few days after they’re planted.

The Lincoln County Master Gardeners — Gamblin’s aunt Edna Bishop is one — visited elementary schools in Brookhaven and out in the rural areas of the county to give out the seed bags to fourth graders and to share information on how one of those seeds could grow into a $100 watermelon.

That’s the top prize in the contest, which is open to any fourth-grade student either in public or private school or homeschooled. Homeschool fourth-graders can participate in the contest by picking up their seeds from Rebecca Bates at the Mississippi State University Extension Service office at 301 S. First St. in room 201.

The object is for the student to plant the seeds they’re given, take care of their plants and grow a prize-winning watermelon. The melons are judged based on weight and the heaviest wins. Judging takes place Aug. 4 from 6-8 p.m. inside Exchange Club Park on the last night of the fair, organizer Steve Edge said. Besides a $100 prize for first, cash prizes of $50 will go to second place and $25 to third place.

New this year, the Exchange Club is getting involved and wants to encourage participation by giving each fourth-grader who brings a watermelon to the weigh-in a free armband good for unlimited rides that night.

The Exchange Club is also providing a $25 gift card for a girl and boy from each school who enters the largest watermelons from their school.

Edge, Bishop, Gamblin and Master Gardner Perry Smith visited fourth-graders at Brookhaven Elementary Monday afternoon to give them seeds and a pep talk.

Edge mentioned the $100 prize and the auditorium of fourth-graders broke into a collective, “Wooooo,” as if it had been practiced. The $50 prize was nice, but only received a round of applause.

“The trick is, you have to raise the watermelon,” Edge said. “We’re going to give you the seed.”

Edge suggested the students find a nice, sunny spot — watermelon plants need at least four hours of sun a day — and get the seeds in the ground as soon as possible. They take about 90 days to grow, which will put them ready right around time for the judging, he said.

Seeds should be sown 3 inches apart in groups of about three in raised hills, about 1 inch deep. As the watermelon begins to grow, the tendril will remain green through the majority of the process. When it’s near ripening, the tendril turns brown. When the skin is smooth, the bottom will be golden, not white. Gardeners can also try the thump test. Thump it and it will sound hollow if it’s ready.

The state’s most recent labor statistics show Lincoln County has dropped a full percentage point of unemployment over the previous... read more